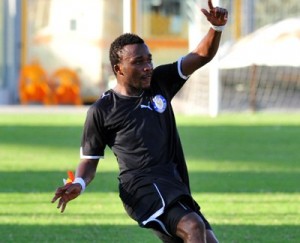 Midfielder Gladson Awako will arrive in Lubumbashi on Monday to complete a medical with DR Congo giants TP Mazembe ahead of a lucrative move.

Berekum Chelsea enforcer left Accra on Sunday night for the Lubumbashi-based club who have invited him to negotiate a deal.

He will undergo a compulsory comprehensive medical examination in the rebel-control region of Lubumbashi before he can put pen to paper.

The player, one of the key ingredients in Chelseaâ€™s impressive maiden CAF Champions Leagueâ€™s outing, was spotted by Mazembe following his impressive showing in the continental competition.

Mazembe are seeking to boost their squad with many players from their club expected to leave for Europe when the January transfer window opens.

Awako could soon join his Ghanaian compatriot, Daniel Nii Adjei, who was signed by Mazembe from Kotoko.

Awakoâ€™s likely departure takes the number to seven of prominent local talents, making a pre-league kick-off move to foreign lands ahead of this weekendâ€™s commencement of the Glo Premier League.

First to leave the shores of Ghana was Emmanuel Baffoe of New Edubiase, who joined South African side Mamelodi Sundowns.

Kotokoâ€™s duo of Ben Acheampong and Owusu Brenya are set for Petro Atletico while Accra Hearts of Oakâ€™s Mahatma Otoo to make a move to the United Arab Emirates.