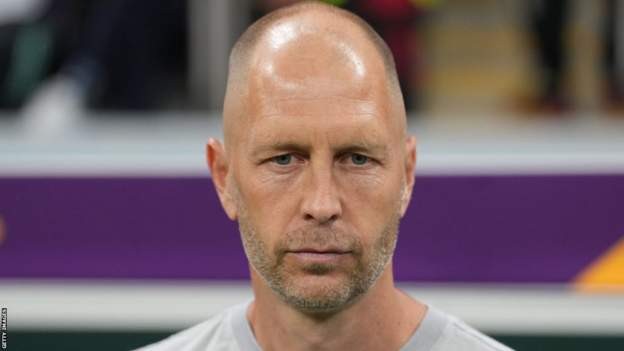 United States boss Gregg Berhalter has called on his players to avoid "the mistakes of the past" when they take on Iran in their must-win final World Cup group game on Tuesday.

"What I saw from the first whistle is one team that really wanted to win the game and one that didn't want to win."

Berhalter added: "Iran wanted to win the game with everything. They played really committed, really focused from the first whistle.

"For us to win the game tomorrow, that's going to have to be the mindset of our group. We don't want to make the mistakes of the past."

The USA must win to reach the last 16, while victory would guarantee that Iran qualify for the knockout stage - and will win them the group if England fail to beat Wales.

Carlos Queiroz's side would also go through if they draw and the Welsh fail to win.

"I hope tomorrow my boys will be able to put together their heads, their souls, their skills and the will to win.

"I hope that they will get the result that gives us a passport for the second round."

Iran winger Alireza Jahanbakhsh, who came off the bench in Friday's 2-0 win against Wales, is suspended after being booked in each of his side's first two matches.

Alireza Beiranvand was absent for the last game following an apparent concussion against England, so Hossein Hosseini is likely to continue in goal.

The USA could name the same side who impressed in Friday's goalless draw with England, though they have only had two shots on target at this World Cup.

England will go through as group winners but deciding who will join them in the last 16 is all on this game, which is very hard to call.

The United States were excellent against England and were very brave on the ball, but they don't seem to have a centre-forward.

Iran were walloped by England but were brilliant against Wales and could have won by more in the end.

I'm going for a draw, which would send Iran through unless Wales beat England and, as I've just said, that is not going to happen.

Each of Iran's past eight World Cup goals have been scored in the second half.A draw would mean the USA became the third team eliminated from a 32-team World Cup despite ending the group stage unbeaten - Belgium and New Zealand bowed out in 1998 and 2010 respectively after drawing all three of their games.The USA could record consecutive clean sheets at the World Cup for the first time since their opening two fixtures at the inaugural tournament in 1930.Yunus Musah celebrates his 20th birthday on the day of this game and can become the first player to score a World Cup goal on his birthday since Patrick Vieira did so for France against Togo in 2006, on the day he turned 30.