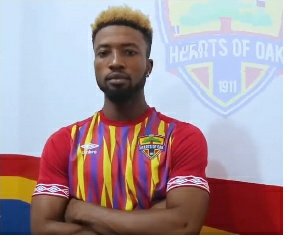 Hearts of Oak stiker Bernard Arthur has taken a swipe at journalists for making false reports about him saying "fake news spread faster than coronavirus."

The want away forward was reacting of media reports claiming the player says the Phobians has disrespected him since he joined the club.

Arthur has put in a transfer request as he seek a move away from Hearts of Oak due to lack of match actions.

The former Liberty Professionals man took to his Facebook page to deny and criticise the media for spreading falsehood.

“Got noticed by the fake news circulating around which I know nothing about, saying Accra Hearts of Oak disrespected me, I know bad news spreads faster than coronavirus”. he wrote.

Arthur joined Hearts of Oak before the beginning of the season following his return from Algeria where he played for top-flight side AS Aïn M'lila.

The WAFA Academy graduate has been linked with a move to city rivals Great Olympics in the second transfer window.