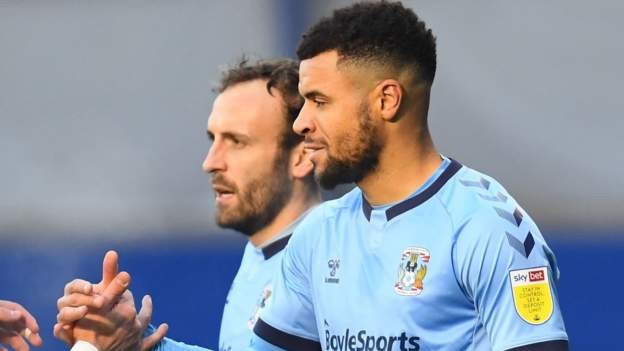 Maxime Biamou starred in his first Coventry City start for more than a month as he led a dominant Sky Blues side to a deserved victory over Rotherham United.

The French striker's sixth-minute opener set Coventry on their way before he helped tee up Tyler Walker for his side's second goal soon after.

The Millers, who were second to the Sky Blues in League One last season, had not lost an away game to Coventry in more than 18 years, but they almost fell further behind when Biamou hit the post with an overhead kick after half-an hour.

The win keeps Coventry in 19th place in the Championship, four points clear of Rotherham, who are one place below them and only outside the relegation spots on goal difference.

Biamou had not made Mark Robins' starting line-up since the 3-2 loss at Watford on 7 November but he made his mark early as Walker flicked a long ball on with his chest into the French striker's path and he slid the ball under the onrushing Jamal Blackman.

A free-kick from just inside the Millers' half saw Biamou help set up the second as he won the ball on the edge of the area and fed it to Callum O'Hare, whose low shot hit the post with Walker on hand to steer the ball into the empty net from a difficult angle.

Liam Kelly's cross with the outside of his right foot saw Biamou inches away from another goal as he hit the woodwork with an acrobatic effort while Blackman did well one-on-one to keep out Walker.

Rotherham's day got worse when Joe Mattock was take off on a stretcher off in the final moments of the first half, and they found chances to break down a strong Coventry defence at a premium in the second period.

Biamou almost set up Walker for a third goal with 35 minutes to go, but the son of former England defender Des only got the edge of his boot on his low cross from the right and his effort went wide of the far post.

Ostigard did add a third goal to wrap up the home side's fourth league win of the season, with Barlaser getting the visitors on the scoresheet with five minutes remaining.

Kyle McFadzean (Coventry City) wins a free kick in the defensive half.

Callum O'Hare (Coventry City) wins a free kick in the defensive half.

Penalty conceded by Ben Wilson (Coventry City) after a foul in the penalty area.