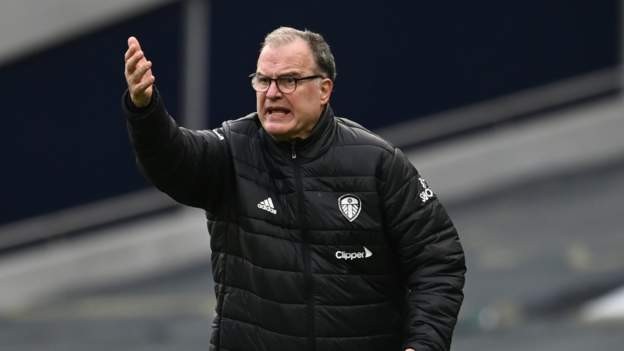 Marcelo Bielsa has managed 10 club sides during his career, as well as spells in charge of Argentina and Chile.

Leeds boss Marcelo Bielsa has indicated he is ready to sign a new contract, but would prefer to wait until the end of the season before deciding his future.

Bielsa's current deal expires this summer and owner Andrea Radrizzani has made it clear he wants him to stay.

"I am not going to manage any other options until my job here at Leeds is done."

Bielsa, 65, was appointed Leeds boss in June 2018 and after defeat in the play-offs in his first season in charge, led the Yorkshire club to the Championship title in 2019-20 and a place in the Premier League for the first time since 2004.

They look well placed to remain in the top flight with the club currently 12th in the table, 10 points clear of the relegation zone, with 14 games remaining.

The Argentine usually signs year-on-year deals and prefers to wait until the summer before deciding his future, meaning any delay does not mean he does not want to stay at Elland Road.

"The first thing I want to highlight, because what it seems like is that the president is offering me an extension and I am delaying it," Bielsa added. "It could be interpreted as the club having more of a desire for me to stay than I do and that's not the case.

"The second thing is that the decision to work in a club for another year is so important that you must have a clear security.

"When you have a third of the season left to play, perhaps in this period there will be things that happen that will alter the judgement that is useful to have in mind. That is my reasoning. So I go to what you ask me.

"But if this happens I will take the time to tell them that they should consider what happens in the last part of the season.