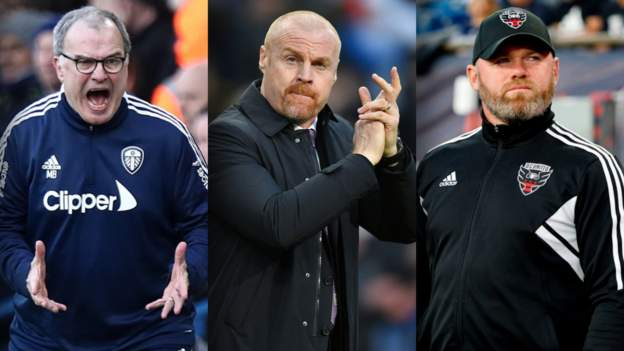 Will one of Marcelo Bielsa (left), Sean Dyche (centre) or Wayne Rooney be Everton's next manager?

Everton owner Farhad Moshiri is in search of the seventh managerial appointment of his chaotic reign as owner at Goodison Park after sacking Frank Lampard.

Lampard's successor will not only have to rescue Everton from a catastrophic run of form that leaves them 19th in the Premier League but also work to an owner who has already dismissed Roberto Martinez, Ronald Koeman, Sam Allardyce, Marco Silva, Rafael Benitez and now Lampard.

Who are the names under consideration to be Everton's next manager - and who might come into contention?

The 67-year-old former Leeds United manager is favoured by Moshiri but is understood to have reservations about the timing of the move and the composition of Everton's squad, which does seem unfit for his very specific purposes.

Bielsa is revered at Elland Road for taking Leeds into the Premier League before he was sacked last February after a run of poor results.

The Argentine is believed to be interested in a return to England but any appointment would be loaded with risk on both sides as Bielsa is known for his demanding fitness regimes and trademark all-out attacking style, requiring pace and fierce intensity.

Dyche has been regularly linked with Everton but has never been approached by the club in the past - so what would persuade Moshiri and director of football Kevin Thelwell to do so now?

He would, in many ways, represent the confident personality needed to knock Everton's unbalanced and non-performing squad into shape for a survival fight, as his record at Burnley proved.

Dyche is available and would surely be interested in Everton - although anyone would need persuading to come in given the club's current dysfunctional state - but would again have to impose his style swiftly. Also: Is Moshiri actually convinced by him?

Corberan's name may come as a surprise to many but he has admirers at Goodison Park.

He has certainly been mentioned as a potential successor to Lampard after a superb start at West Bromwich Albion, taking them from the foot of the Championship towards the play-off places since his appointment in October.

The 39-year-old Spaniard guided Huddersfield Town to the Championship play-off final last season, losing to Nottingham Forest, then returned to England after a short spell in Greece with Olympiakos.

Corberan could almost be regarded as "Bielsa-lite", a prodigy who worked with the Argentine at Leeds United and plays in a similar style. He would be a major gamble but would surely be interested in making the jump to the Premier League.

Hasenhuttl's name was discussed at Everton board level when they were searching for a successor to Rafael Benitez a year ago but it was accepted it would be impossible to get him out of Southampton, and the job went to Lampard.

The barrier has been removed after the Austrian, 55, was sacked in November. Despite a disappointing end to his near four-year tenure, he did a good job at St Mary's.

Hasenhuttl is awaiting his next opportunity and might be receptive to any Everton overtures.

Rooney declined the opportunity to be interviewed to replace Rafael Benitez while he was Derby County but the answer would surely be different now he is manager at Washington-based Major League Soccer side DC United.

He might appeal to the sentimentalists after his two spells as a player at Everton but has no managerial experience at the highest level. He would bring passion to the job as an Everton fan but would he have the know-how to get them out of their current deep hole? Very risky.

The romantics among Everton fans would welcome the idea of the great cult hero returning to the club he left in July 2022 to seek a managerial opportunity that has yet to materialise. He worked under seven managers at Goodison Park but the realists would point out his only experience in the main job was two brief spells as a caretaker - the second for only one game, which was lost.

Ferguson would a punt into the unknown and another on the list of high-risk gambles. Would Everton be brave enough to take it? Unlikely.

The mere mention of Allardyce's name will have many Everton fans recoiling in horror after he was sacked in May 2018 after six loveless months in charge at Goodison Park.

This veteran football firefighter will point out, however, that Everton were eighth at the end of his short stint, riches compared to their current plight.

Drawbacks? Allardyce was hugely unpopular with Everton fans back then, so would a board besieged by protesting supporters potentially inflame the situation by going back to him?

He also played his part in Everton's transfer profligacy by spending almost £50m on forwards Cenk Tosun and Theo Walcott in his one transfer window. Both were expensive flops.

Last resort. Desperate measure. Call it what you will but it would be a sign of the mess Everton are in if they seriously contemplated this one. Surely not.

The former Wolves manager was interviewed by Everton in summer 2021 after he left Molineux but was beaten to the job by Rafael Benitez. Since then, he has failed miserably at Tottenham, where he was sacked after only four months, and is now manager of Saudi club Al-Ittihad.

Would be a low-key choice but it would all depend on how far Everton got down their list of options as to whether they would turn to the 48-year-old.

Sources in Spain claim Everton have sounded out the 57-year-old, who has a good reputation but no experience in England - and that is before you get to the chaos that would await him at Goodison Park.

Marcelino certainly knows the ropes in Spain after working at Sevilla, Villarreal and Valencia. Stepped down at Athletic Bilbao in May 2022. Rank outsider.