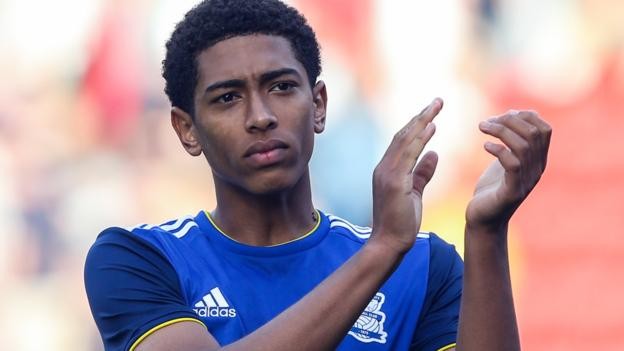 Jude Bellingham, who does not turn 17 until June, has struck the winner in Birmingham's past two gamesFollow live text coverage of Saturday's EFL action from 12:00 BST

Birmingham City could hand another start to 16-year-old Jude Bellingham, after his back-to-back winning goals against Stoke and Charlton Athletic.

Left-backs Jonathan Grounds (calf) and Cheick Keita (hamtsring) are both getting close to resuming full fitness.

Visitors Preston could have Andrew Hughes, David Nugent and Ben Pearson available for the game at St Andrew's.

Pearson has recovered from a virus, while Hughes and Nugent came through a reserve match on Tuesday.

Birmingham have won only one of their last 11 league matches against Preston (W1 D4 L6), winning this exact fixture last season 3-0 under Garry Monk. Preston have kept one clean sheet in their last 23 away league visits to Birmingham (excluding play-offs), winning 1-0 in September 2001 under David Moyes. Birmingham City are looking to win three consecutive league matches for the first time since a run of four in October 2018. The two Championship teams whose matches have seen the fewest shots this season are Birmingham (138) and Preston's (142). Birmingham have managed just one first-half goal in the Championship this season, the joint-fewest along with Huddersfield Town, while opponents Preston have scored the most first-half goals (8). Excluding own goals, Preston have had more scorers than any other Championship side this season (8).