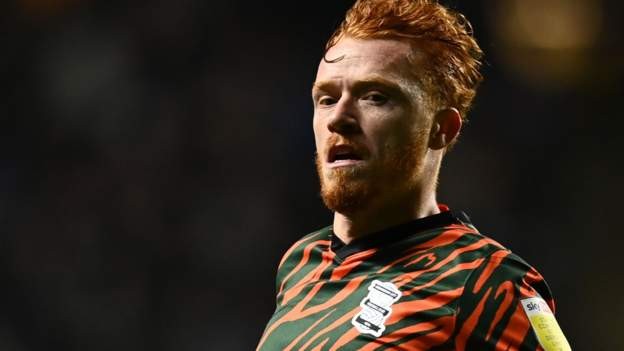 Ryan Woods' red card for bringing down Ian Maatsen was only his second, having only been sent off once before - for Brentford in 2018

Birmingham City have failed with their appeal to get midfielder Ryan Woods' red card overturned in Tuesday's 0-0 draw with Coventry City.

Woods was sent off in the 82nd minute for tripping Coventry's on-loan Chelsea midfielder Ian Maatsen.

Blues boss Lee Bowyer argued that there was a covering defender - and that it should only have been a yellow card.

But referee Lee Doughty adjudged it serious foul play - and his opinion was upheld, ensuring a three-game ban.

With fellow midfielder Gary Gardner having begun a four-game ban on Tuesday following his second red card of the season in Saturday's defeat at Hull, Blues are now without both players for the home games with Blackpool and Cardiff City, either side of the trip to Millwall.

They do have Australian Riley McGree, but it could mean an opportunity for 17-year old Wales youth international Jordan James, who has already made three Championship substitute appearances and is training full-time with the first team squad.

Woods has received 65 bookings in his career, but had only ever had one red card before - for Brentford against Sheffield United in March 2018.