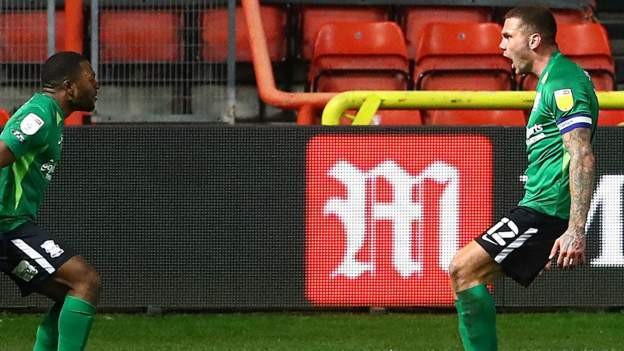 Dean climbed highest in the six-yard box to head Jeremie Bela's corner past Daniel Bentley, a deserved reward for their second-half ambition.

After a dire opening half, the Robins almost went ahead straight after the break when Tomas Kalas met Chris Brunt's inswinging corner at the back post and directed a shot goalwards, but Maxime Colin cleared off the line.

But Blues then came alive, as Ivan Sanchez cut into the box and fired a fierce left-footed strike against the post moments before goalkeeper Bentley kept out Ivan Sunjic's piledriver.

And, with the pressure mounting, Dean's second goal of the season earned a valuable win.

Birmingham had won just once on the road this season, but history repeated itself as they maintained their stunning record at Ashton Gate with an eighth win in their last 10 visits.

Form also suggested that the goals would not be flowing, with Blues having scored and conceded just four times in seven away trips this campaign, while the Robins had netted three times in their previous five home games.

A dour first half lived up to this billing with just one half-chance, Blues keeper Neil Etheridge coming off his line to deny Callum O'Dowda as he got on the end of a free-kick.

Birmingham came out of their shells after the break and their enterprise was rewarded from the familiar set-piece route.

Famara Diedhiou fired just over in stoppage-time for the hosts, but Blues comfortably held out for a fourth away clean sheet this season as Dean Holden's men failed to spark in front of goal.

A third win of the season lifted Aitor Karanka's side up to 16th, while a second defeat in three matches dropped the Robins out of the play-off places down to eighth.

Attempt blocked. Antoine Semenyo (Bristol City) right footed shot from the left side of the box is blocked. Assisted by Tyreeq Bakinson.

Tomas Kalas (Bristol City) wins a free kick in the defensive half.

Attempt missed. Famara Diédhiou (Bristol City) header from the left side of the six yard box is close, but misses the top left corner. Assisted by Callum O'Dowda with a cross.

Jérémie Bela (Birmingham City) is shown the yellow card for a bad foul.

Jack Hunt (Bristol City) wins a free kick in the attacking half.