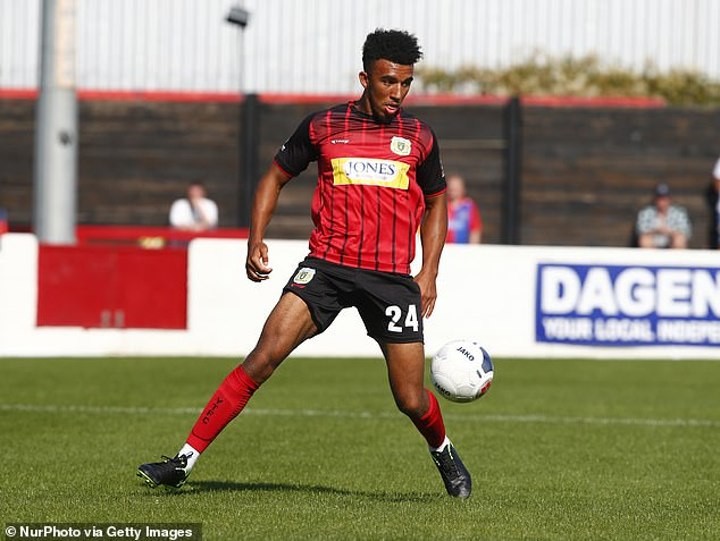 He is fitting in this interview before his 3pm fitness session. He has been doing three a day during lockdown, 'sometimes five'.

'If I don't make it, I don't want it to be for the lack of trying,' says the 21-year-old. 'I don't want to look back and think if only I'd trained harder or listened to that guy more. I want to give it my all.'

Scroll down for video.

As the American author and publisher George Lorimer said: 'Wake up with determination, go to bed with satisfaction.'

Hutton's career so far has determination written all over it. Released by Walsall at 15, unbowed, he worked at a Birmingham gym and waited on tables in Frankie and Benny's. He had a trial at Manchester United and stepped into non-league with Sutton Coldfield Town then Hednesford where he was spotted by Birmingham.

Last month's curtailing of the National League season was sorely felt by many but not least Hutton who had been flying while on loan with promotion chasing Yeovil Town. His performances attracted scouts from across the leagues. Now this bright-thinking full-back is hoping to make a fresh impression on his parent club.

'I learned so much at Yeovil. It was a shame the season had to finish,' says Hutton. 'A few of us young ones, like Caleb Richards who was on loan from Norwich, were living together in the same house so we'd train then go bowling together or go for a coffee. The experienced guys were great too, always keen to give advice. We had become a really tight group and felt we had a really good chance of going up.'

Impressed by Hutton's athleticism and willingness to learn, manager Darren Sarll also utilised the right-sided defender on the left.

'My old Birmingham manager Garry Monk told me work on your weaknesses but work on your strengths too,' Hutton says. 'I'm known for being quick and playing on the right but adapting to the left-hand side was great for my education and it adds another string to my bow now.'

Indeed, staff at Birmingham have high hopes for Hutton who has been likened in style to Manchester City and England full-back Kyle Walker.

'I was talking to Richard Beale, our former development coach, and he said: ''Kyle Walker has gone from Tottenham to Manchester City for £50million and there's nothing he's got that you haven't in terms of natural ability, you just have to work at it.'' I was like ''wow'' but it was great he had that belief.

'I watch Kyle a lot and see what he does in certain situations and go over my own game. The key thing is that I keep improving, whether it's with Birmingham or on loan again even in League Two or League One. I just want to keep getting better.

'I used to see some young players at clubs who really didn't realise how lucky they were. I know how lucky I am to have this opportunity and I don't want to throw it away.'

The early blips Hutton suffered have served him well. He has started his own business RH Academy, perhaps as a back-up plan, after taking coaching badges and working with friends to put on sessions at West Brom and Aston Villa.

'I studied sports performance at college so I'm always interested in what happens in training. I even watch NFL players training to see what they do to become more powerful. Any extra bit helps.'

The drive and maturity Hutton shows owe a lot to the support he receives from mum Emma and dad Andrew, a martial arts enthusiast.

Hailing from a mixed race family today prompts concern for footballers in regard to the pattern of infection from coronavirus. Many have called for extra precautions to be put in place.

'It's a worry,' says Hutton. 'I can understand players being wary especially if they've lost someone or have someone vulnerable in their household. There's obvious health risks.

'The staff at Birmingham have been keeping us up to date and sent an email saying ''keep up with your vitamins, continue to self-isolate and make sure you are in the best shape so you can be ready to return to training''. We have to trust in the science but if the checks and testing are in place, I am ready.'