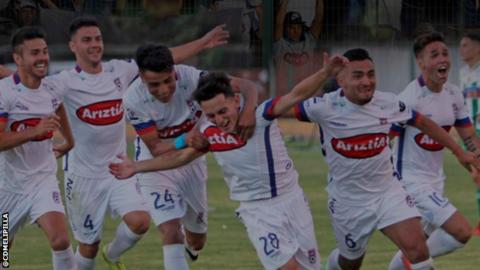 Inside an empty ground, following days of raging debate, Chilean team Deportes Melipilla were celebrating - and they hadn't even kicked a ball.

How about this for one of the strangest ways to win promotion?

On 19 December, Melipilla lost a penalty shootout to Deportes Vallenar, in a match that was to decide which team went up to the Primera B - Chile's second tier.

Vallenar, at their home stadium, went wild. They had themselves been on the verge of defeat in the shootout, but Juan Silva scored to level, and they went on to win.

Their joy, it turned out, would not last long.

After the game, Melipilla argued that Silva's penalty should have been ruled out - because he had hesitated during his run-up.

The referee did spot this at the time - and he ordered a retake, which Silva also scored - but Melipilla said that according to the rules Silva's first effort should have been automatically chalked up as a miss.

The Chilean Football Association agreed, and they decided that Vallenar's victory should not count. They said the shootout would have to be replayed - at a neutral venue and behind closed doors.

Fast forward then to Wednesday, the day when finally all would be decided.

In the ground there were journalists, local police, no fans and only one team. Vallenar did not turn up.

Speaking on Tuesday, Vallenar's technical Juan Jose Ossandon said his side would not be travelling because they didn't have enough players to compete - as they were all out of contract, with the season finished.

"We'll take this as far as we can," he added. "There are legal options that we are looking at."

Melipilla did turn up - so they were automatically awarded victory and the promotion that went with it.

"You have to follow the laws of the game," Melipilla's goalkeeper Jaime Bravo said. "They say you can't stutter your run-up and he (Silva) did."

Vallenar winger Leonel Mena, who was 970km away and watched events unfold on TV, claimed Melipilla had "stolen our title".

He told Chilean broadcaster CDF: "It's a lack of respect, what they're doing. It's hurt us deeply - morally and psychologically. A whole town had celebrated, cried with joy. Now it's being stolen away."

"They had the chance to beat us on the pitch but couldn't. We are really upset. I was about to return to the Primera B. Now I don't know what I'll do."