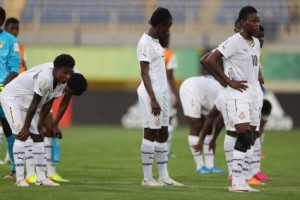 The Black Maidens have refused to leave the Maresat Plaza Hotel over the delayed payment of per diems and bonuses - in a repeat of the shocking episode which rocked the Black Queens just a year ago.

Players and officials of the country's female under-17 team appear to be taken a cue from their seniors and have vowed to stay at the hotel until their entitlements due them are settled.

The team is yet to be paid their per diems and qualification bonuses for participating in the 2016 FIFA Under-17 Women's World Cup in Jordan.

“Is very sad we don’t have even transport to leave for a various destination,” management Chairman Augustine Asante told Starr FM

“So we won’t leave the hotel. We were promised before we left for Jordan and yet we didn’t see anyone of the Sports Ministry.”

The latest stand-off is a repeat of a pathetic episode which saw the Black Queens put up a similar conduct over delayed payment of their bonuses for clinching gold at the 2015 All Africa Games.

The Black Maidens exited the competition in the quarter-finals after losing 2-1 to Korea DPR last Thursday.