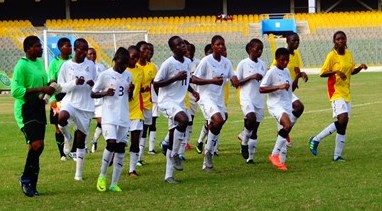 Ghanaâ€™s U17 womenâ€™s team thrashed Alabama University 5-0 in their first warm up match ahead of the 2014 World Cup.

The Black Maidens are on tour in the USA to prepare for the World Cup which kicks off on March 15 in Costa Rica.

The team only arrived in the state of Alabama late last week to begin their preparations.

They however hit the ground running by putting five past Alabama University in just their first warm up game over the weekend.

Coach Evans Adoteyâ€™s side are expected to play four more friendly games in the US before travelling to Costa Rica for the start of the World Cup.

Ghana is drawn in Group B at the World Cup alongside Germany, Canada and North Korea.