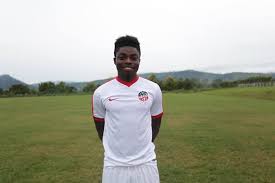 Mensah joined the Wild Tigers in the ongoing winter transfer window after impressing on a two-week trial.

But the 18-year-old guardsman could not join his new teammates in their winter training in La Manga, Spain, following his involvement with the Ghana's U-20 side who are preparing for the upcoming Africa Youth Championship to be held in Niger.

He is one of three FC Nordsjælland players in coach Jimmy Cobblah's team for the tournament after Kudus Mohammed and Ibrahim Sadiq.

Mensah becomes the fifth Ghanaian in the ranks of the Right to Dream Park outfit after Godsway Donyoh, Clinton Antwi, Sadiq Abubakar and Kudus Mohammed.

He was an instrumental figure in Ghana's U-17 team that reached the quarter final stage of the 2017 FIFA U-17 World Cup in India.