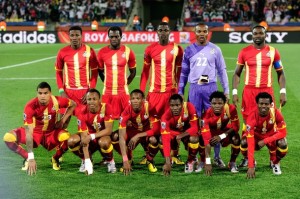 Almost all the players invited for Ghanaâ€™s key match against Congo in a 2012 Africa Cup of Nations qualifier on Sunday have arrived in camp in Kenya.

The trio of John Mensah, Sulley Muntari and Asamoah Gyan joined camp on Wednesday morning to make the squad strong.

England-based duo of John Pantsil and Richard Kingson are also in camp as well as youngsters Daniel Opare, Samuel Inkoom and David Addy.

Partizan Belgrade duo of Prince Tagoe and Dominic Adiyiah also arrived from their Serbian base on Tuesday night to give coach Goran Stevanovic hope.

The Udinese duo of Kwadwo Asamoah and Agyemang Badu are also in camp as well as the home-based players called in the team.

Experienced Derek Boateng, Anthony Annan, Bernard Kumordzi as well as Andre Ayew are all at the Black Stars hotel in Nairobi.

The Black Stars trained fully for the first time on Tuesday night and will train again on Wednesday.

The medical team is expected to continue working on Muntari to ensure that heâ€™s fit for the game.