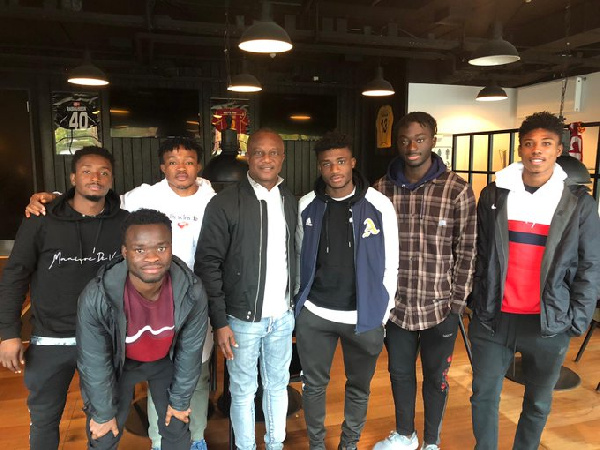 Ghana coach Kwesi Appiah has visited the country's players with Danish top-flight club Nordsjaelland in his latest leg of his tour of Europe.

The Black Stars boss is scouring Europe for in-form young talented players to augment the squad ahead of the start of 2021 Africa Cup of Nations qualifiers next month.

Several Nordsjaelland players are among Ghana's top performers in Europe this season with super talented midfielder Mohammed Kudus and striker Godsway Donyoh among their best players in Denmark.

Other top Ghanaian players who have excelled for the club in the Danish top league are speedy winger Isaac Atanga, skillful U17 midfielder Ibrahim Sadiq as well as Maxwell Woledzi, Abdul Mumin, Clinton Antwi and Abu Francis.

Kwesi Appiah toured the club's facilities, watched a few training sessions before sitting down with the players to discuss his plans of widening the Black Stars net for new players.

He encouraged the player to keep giving off their best for the club as their performance could lead to them being handed call-ups to the national teams of Ghana which has delighted the Danish club.

"Thanks to the @ghanafaofficial and Head Coach of the #BlackStars James Kwesi Appiah for visiting us and the Ghanaian boys here in Denmark🙌🇬🇭'" a statement released by the club after the visit read.

Nordsjaelland are currently 9th on the league table in Denmark and all their Ghanaian players have had the opportunity of playing first team matches.

Most of their players have featured for the junior national teams of Ghana after playing for the Right to Dream Academy.

Winger Atanga is among the leading scorers in the league with four goals after 12 matches so far this season.

Kudus has won four man-of-match awards since the start of the season.