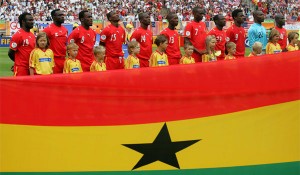 Ghana's trip to the United States to play in the Obama Tournament is off after the organizers cancelled the event less than a week before it was to be held.

Five international teams initially were scheduled to meet over the weekend of February 12; then the matches were switched to May 21-23 with teams from Ghana, Nigeria, Kenya, Malaysia and Puerto Rico slated to participate.

But the local Black Stars who were supposed to represent Ghana at the tournament failed to secure their visas for the tournament, organizers said.

â€œAll the teams didnâ€™t get a visa."

The Football Association of Malaysia released a statement today saying it withdrew its team from the Green Soccer Bowl because "there were issues with Ghanaâ€™s and Puerto Ricoâ€™s visa application, hence their withdrawal."

Oleh said ticket buyers will be issued refunds. He said he didnâ€™t know how many tickets had been sold.

When the event was announced in February, it was met with skepticism by those in the local soccer community.

â€œIâ€™m surprised that Ghana would send their whole national squad over here to play a game on artificial turf a month before the (World Cup) games are played in South Africa, but apparently thatâ€™s the case,â€ Faulkner said at the time.

Faulkner said today he felt sorry for Oleh, but wasnâ€™t surprised the event was canceled.

"I told him some months ago that I did not believe this was viable," Faulkner said.

"I think it was a brave effort, but it just wasnâ€™t going to happen."

Faulkner said Andreas Apostolopoulos, the Toronto real estate developer who recently bought the Silverdome in an auction for $583,000, is a soccer supporter.

Faulkner hopes that soccer eventually will return to the Silverdome.

The venue hosted first-round games in the 1994 World Cup and was home to the Detroit Express of the now-defunct North American Soccer League in 1978-80.