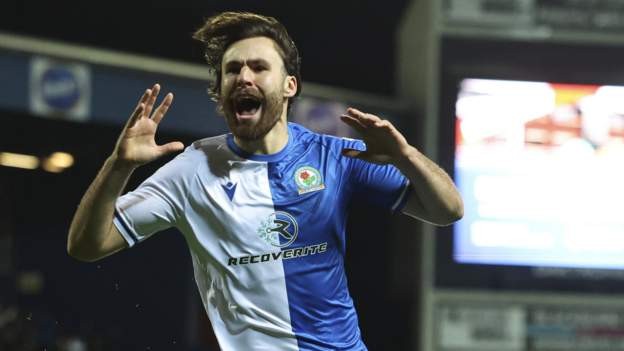 Ben Brereton Diaz's 17th Championship goal of the season clinched victory for Blackburn over Preston in the Lancashire derby as they moved up to fourth in the table.

Both teams struggled to create clear-cut chances on a rain-soaked pitch at Ewood Park.

But Brereton Diaz struck eight minutes into the second half when he headed home from Reda Khadra's cross.

It was the striker's fourth goal in as many matches and Blackburn have now won four of their past five matches.

Preston were unable to find an equaliser but will feel they should have been awarded a penalty when Ryan Nyambe appeared to handle the ball in the area.

At the other end, goalkeeper Daniel Iversen produced a fine save to prevent Brereton Diaz adding a second.

They have responded superbly to a humiliating 7-0 home defeat at home against leaders Fulham, taking 12 points from a possible 15 in their five matches since that debacle.

Preston recently drew with Fulham and beat Bournemouth, but they have been inconsistent this season and this defeat leaves them in 18th place.

Alan Browne (Preston North End) wins a free kick in the defensive half.

Attempt saved. Ben Brereton (Blackburn Rovers) right footed shot from the left side of the box is saved in the bottom right corner. Assisted by Harry Pickering.

Tyrhys Dolan (Blackburn Rovers) wins a free kick in the attacking half.

Lewis Travis (Blackburn Rovers) wins a free kick in the defensive half.

Attempt blocked. Daniel Johnson (Preston North End) left footed shot from the left side of the box is blocked. Assisted by Joshua Earl.