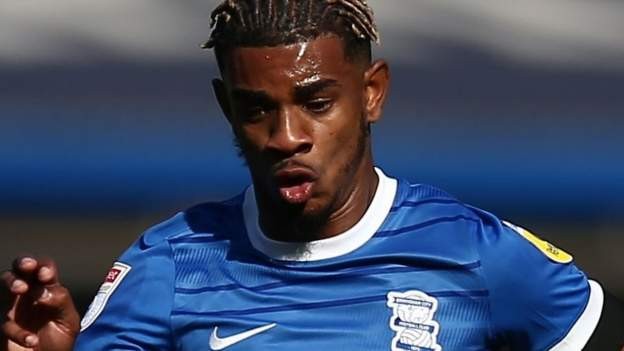 Juninho Bacuna is in his second season with Birmingham City, having signed from Rangers in January

The Championship club say they are "appalled at the racist abuse directed toward Juninho Bacuna on social media" from accounts "based outside the UK".

They also "condemned the perpetrators' actions in the strongest possible terms".

That followed his return from international duty in Indonesia with Curacao.

He played in two friendlies against Indonesia, scoring in the first game, a 3-2 defeat last Saturday, then getting sent off in the second, a 2-1 defeat on Tuesday.

Indonesia fans are understood to have targeted the player on his Instagram account, following the second heated match in midweek.

Blues added in their statement: "Initial investigations determine that these accounts are based outside of the United Kingdom, with reporting systems on Twitter and Instagram utilised as contact is established to these platforms.

"Staff at the club are in close dialogue with Bacuna and will continue to offer him all the necessary support.

"It must be reiterated that Saturday's match at Bramall Lane, which was played in a tremendous competitive spirit, saw the two teams unite to mark the start of Black History Month, with Birmingham extremely appreciative to Sheffield United for the invitation to celebrate the heritage of former players and send a message to those unwilling to accept that football is for everyone.

"Blues' history is Black History and the club will continue to celebrate and champion diversity, making it unequivocally clear that discrimination of any form will not be tolerated."