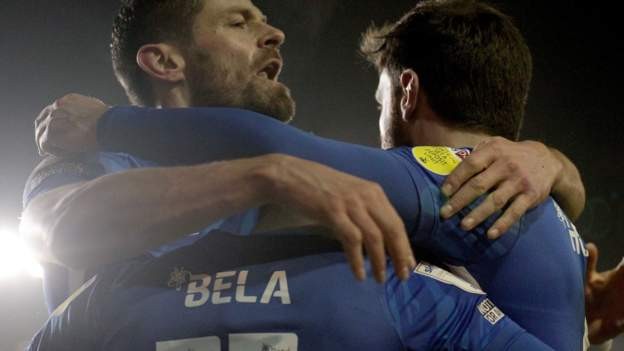 Birmingham City scored twice in the final five minutes to salvage a draw at home to Peterborough United.

Jack Marriott finished well to put Peterborough ahead after a break that began deep in their own half before Jonson Clarke-Harris scored from the penalty spot.

Gary Gardner fired in what seemed a late consolation goal from the edge of the area for Blues, who were poor for long periods.

But Jeremie Bela broke down the left and crossed for Scott Hogan to flash a header past Steven Benda to secure an unlikely point.

Birmingham could have won it in stoppage time when Lukas Jutkiewicz inexplicably missed a free header in the penalty area.

It was yet more late heartbreak for Peterborough, who conceded three goals in the final 12 minutes to lose 3-0 at West Bromwich Albion on Saturday, having also conceded twice in the last 10 minutes in both of their league games prior to that.

Darren Ferguson's side will be gutted to have missed the chance to draw level on points with Reading at the foot of the table - they are two points off the Royals in the fight to avoid the final relegation place with a game in hand.

Blues remain 18th in the division, 12 points above their opponents as Lee Bowyer's side failed to win for the eighth time in nine games in all competitions.

Kristian Pedersen glanced an early header wide for Blues before Peterborough hit them on the break to take the lead.

Kwame Poku - who like goalscorer Marriott had been brought back into the side by Ferguson - won the ball just outside his own penalty area before progressing halfway up the field and feeding Marriott who beat Neil Etheridge with a sliding finish.

Birmingham should have been level nine minutes before the break after Hogan cut in from the right and fed Jutkiewicz, but the striker slashed a shot wide from 12 yards under pressure.

And when Clarke-Harris made it 2-0 after Marc Roberts was penalised for a push on substitute Callum Morton in the box it seemed as though Birmingham would go away empty-handed having been devoid of attacking intent for much of the game.

But they rallied and Posh dropped deeper as Gardner's shot bounced home to make it 2-1 before Hogan's equaliser.

"We started OK I thought, we were on the front foot and asking questions of them defensively, but then they break and score against the run of play and then that was it, we just couldn't get going after that and it wasn't good.

"The players, whether it was passing, competing for second balls, we were second best, I can't defend the lads.

"What frustrates me the most is you go from doing what we did on Saturday and the way we performed and battled and fought, to that. You can't do that, it's too inconsistent.

"Tonight, for me, Peterborough were there for the taking and in the end we were lucky to get a point at home, it can't be like that."

"The overall result's a bad one because you're 2-0 up with 10 minutes to go, the game's done, or it should be done anyway.

"We just couldn't keep our composure, but up until that point I thought we were very good.

"When it goes from 2-0 to 2-1 away from home in particular, it becomes difficult because they're leaving one v one at the back, they're just ploughing the ball in the box."

Marc Roberts (Birmingham City) wins a free kick in the defensive half.

Bali Mumba (Peterborough United) wins a free kick in the defensive half.

Attempt missed. Lukas Jutkiewicz (Birmingham City) header from the centre of the box misses to the right. Assisted by Jordan Graham with a cross following a set piece situation.

Maxime Colin (Birmingham City) wins a free kick in the defensive half.

Goal! Birmingham City 2, Peterborough United 2. Scott Hogan (Birmingham City) header from the centre of the box to the bottom right corner. Assisted by Jérémie Bela with a cross.