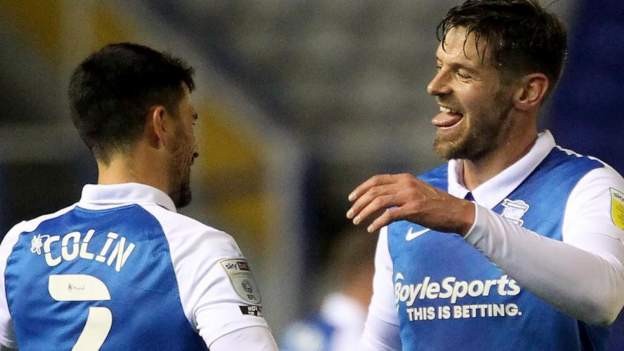 Until their victory over Huddersfield, Birmingham had failed to win since beating Brentford in their league opener on 12 September

Isaac Mbenza's first Terriers goal for almost 18 months looked to have rescued a point for Town with five minutes left after they had trailed for much of the game to a Gary Gardner header.

But Jutkiewicz struck in the 90th minute with a cool first-time finish on the rebound after fellow substitute Jonathan Leko had rattled the bar.

Blues had not scored since a 1-1 draw at Stoke on 4 October - recording three consecutive blanks - but almost netted a second immediately after Gardner's opener as Bela's free-kick hit the post and George Friend's follow-up was cleared off the line by Richard Stearman.

Huddersfield's Josh Koroma fired against the bar early in the second half but they appeared to have run out of ideas until Mbenza curled a fine 20-yard free-kick over the wall into the top corner.

It was only the Belgian forward's second Huddersfield goal, the first coming during an initial loan spell with the club in a 1-1 Premier League draw against Manchester United in May 2019.

But Jutkiewicz's instinctive finish meant it counted for little, condemning the Terriers to back-to-back defeats as Birmingham recorded a first win since the opening day to leapfrog Town into 15th place.

Huddersfield boss Carlos Corberan told BBC Radio Leeds: "We started the game how we wanted to and we controlled the early part of the game but we didn't create the chances we expected to create and we didn't use our set-pieces well.

"They were very focused on defending and using the counter-attack and we had another type of idea - we wanted to have the ball, we wanted to dominate and create chances.

"I think in the second half we reacted really well and we did everything we have to do to change the result of the game but unfortunately they scored on the counter-attack with their only chance of the second half."

Attempt missed. Jérémie Bela (Birmingham City) right footed shot from outside the box is high and wide to the right from a direct free kick.

Iván Sánchez (Birmingham City) wins a free kick in the attacking half.

Christopher Schindler (Huddersfield Town) wins a free kick in the defensive half.

Attempt missed. Christopher Schindler (Huddersfield Town) right footed shot from the centre of the box is close, but misses to the right. Assisted by Pipa following a corner.

Jonathan Leko (Birmingham City) hits the bar with a left footed shot from the centre of the box. Assisted by Lukas Jutkiewicz.

Pipa (Huddersfield Town) wins a free kick in the attacking half.