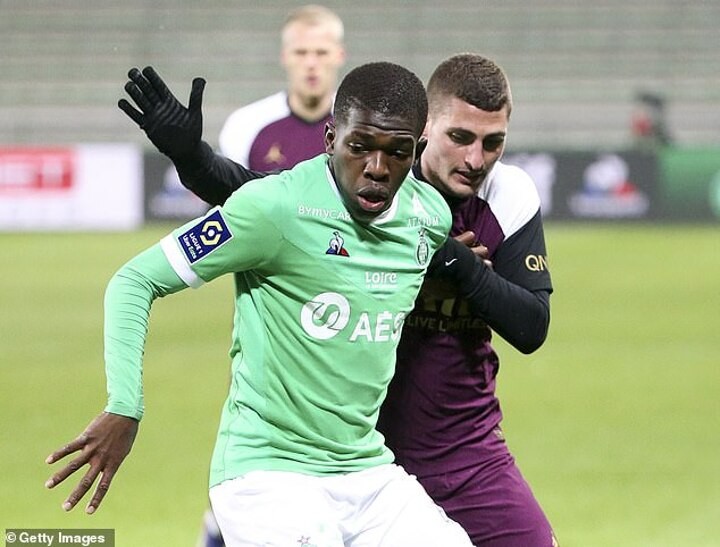 The 17-year-old defensive midfielder has underlined his status as one of the most promising players in France this season with 23 appearances so far in Ligue 1.

But it is widely expected that the French side will need to sell to raise money through player sales in the summer and one of their latest jewels in Gourna-Douath could be available for an enticing fee.

Foot Mercarto report that he has caught the eye at Chelsea and they could make a summer move to bring him to the Premier League.

The French publication adds that St Etienne, who are managed by former Leicester and Southampton boss Claude Puel, wold accept a bid in the region of £23m and that the player's representatives are planning for him to depart.

Gourna-Douth could follow the path of fellow academy products William Saliba and Wesley Fofana by breaking into the first team of the French side before moving on to the Premier League.

Saliba has struggled at Arsenal and is currently on loan at Nice but Fofana has flourished in his debut season at The Foxes after a £30m transfer.

Gourna-Douath also reportedly caught the eye of Mauricio Pochettino in his first match as PSG manager earlier this year.

PSG were held to a 1-1 draw by St Etienne back in January with Gourna-Douath stealing the show in Pochettino's return to the dugout.

A potential move to Chelsea could see him become the first signing under new manager Thomas Tuchel.

Currently, the Stamford Bridge side are fifth in the Premier League standings and play rivals Liverpool, who are sixth, at Anfield on Thursday night.