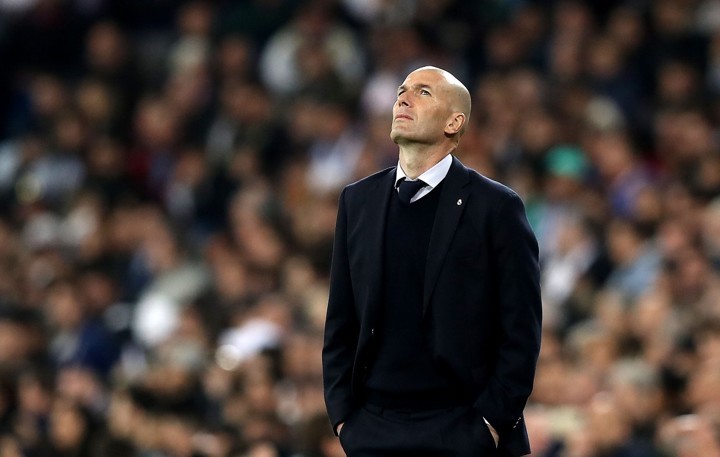 A major shock was recorded at the Santiago Bernabeu, with Celta Vigo snatching a late equalizer to leave the capital with an unexpected point.

Los Blancos came into the clash on the back of a five-game winning run and having seen Barcelona go level on points with them on Saturday, they would have fancied their chances of outrightly reclaiming top spot against a Celta side that are engaged in a relegation dogfight.

They were, however, stunned by an early strike by Fedor Smolov and went into the break behind. But Madrid rallied back in the second half, with Toni Kroos levelling matters seven minutes after the restart (his sixth goal against Celta), while captain Sergio Ramos put the hosts 2-1 up with a well-taken penalty in the 65th minute - after he had seen an earlier effort chalked off by VAR.

Former Valencia man, Santi Mina, came off the bench to break Madrid hearts when he equalized in the 85th minute to ensure both sides shared the spoils. Although Real Madrid went one point clear of Barcelona, Zinedine Zidane would see this as two points dropped in what is setting up to be an enthralling title race.

Here, we shall be highlighting three reasons why Real Madrid fell to the surprise stalemate.

Real Madrid have not exactly been famed for their defensive solidity over the years and much of their success was down to their potent attack.

Clean sheets were virtually non-existent and their game plan was basically to outscore the opponents to pick up victories.

However, Zidane seems to have rectified this issue and the 13-time European champions came into the clash with Celta boasting the best defensive record in Europe's top five leagues, with their 14 goals conceded from 23 matches their best defensive return in over seven decades.

It took just seven minutes for Ramos and co. to fall back into their bad habits, with the defense failing track the runs of both Smolov and Mina for the two goals, while Courtois also had to pull off a fine save in the first half to keep his side in the game.

Ultimately, their defensive lapses did not cost them too much but with marquee clashes against Manchester City and Barcelona on the horizon, fans of Los Blancos would be hoping that this was a one-off.

With players like Eden Hazard, Karim Benzema, Vinicius Junior, and Gareth Bale on the books at the Bernabeu, Real Madrid have no shortage of quality attackers within their ranks, with these guys among the best in the business of finding the back of the net.

However, they came undone against a resolute Celta Vigo defence, with the visitors keeping their shape and ensuring that Ruben Blanco remained relatively quiet for most of the match.

Indeed, the home side failed to fashion a single shot on target for the entirety of the first half and their total of four shots on target in the full 90 minutes was disappointing considering the quality of players on display.

Eden Hazard made his long-awaited return from injury, having been sidelined since November with an ankle injury.

The Belgian international did not do too much in the game, which was not a surprise and although he won a penalty in the second half, there were signs of match rustiness, with the former Chelsea man failing to record a single shot in the game.

Top scorer, Karim Benzema, was also relatively quiet but most disappointing was the performance of Gareth Bale.

The 30-year-old was close to departing the Spanish capital over the summer and despite remaining on the books, it is no hidden secret that he is not well loved by the Real Madrid faithful.

He did his reputation no favours with what was another lethargic display, blasting wide from close range, while also missing a good chance when played through in the first half.

His latest blank means that Bale has not scored at the Santiago Bernabeu since netting the second goal in the first game of Zidane's second spell (coincidentally against Celta Vigo) in March 2019, a run stretching 337 days.

With players like Iago Aspas, Rafinha, Denis Suarez, Pione Sisto, and Santi Mina, Celta Vigo have more than enough quality and even though they are not quite on the level of their opponents, these players are good enough to trouble any defence on their day.

This season has, however, seen the Galicean side struggle for goals, with their total of 19 goals in their first 23 matches very poor to say the least and a major reason why they are stuck in a relegation battle.

Real Madrid's improved defence means that chances come at a premium against them and Celta Vigo brought their A-game in front of goal, making the most of their opportunities to leave the capital with an invaluable point.

They recorded four shots in the match, with two of those ending in the back of the net, while also forcing a good save from Courtois with another and although the Madrid defence did them a lot of favours, it takes nothing away from what was a clinical performance from Oscar Garcia's men.