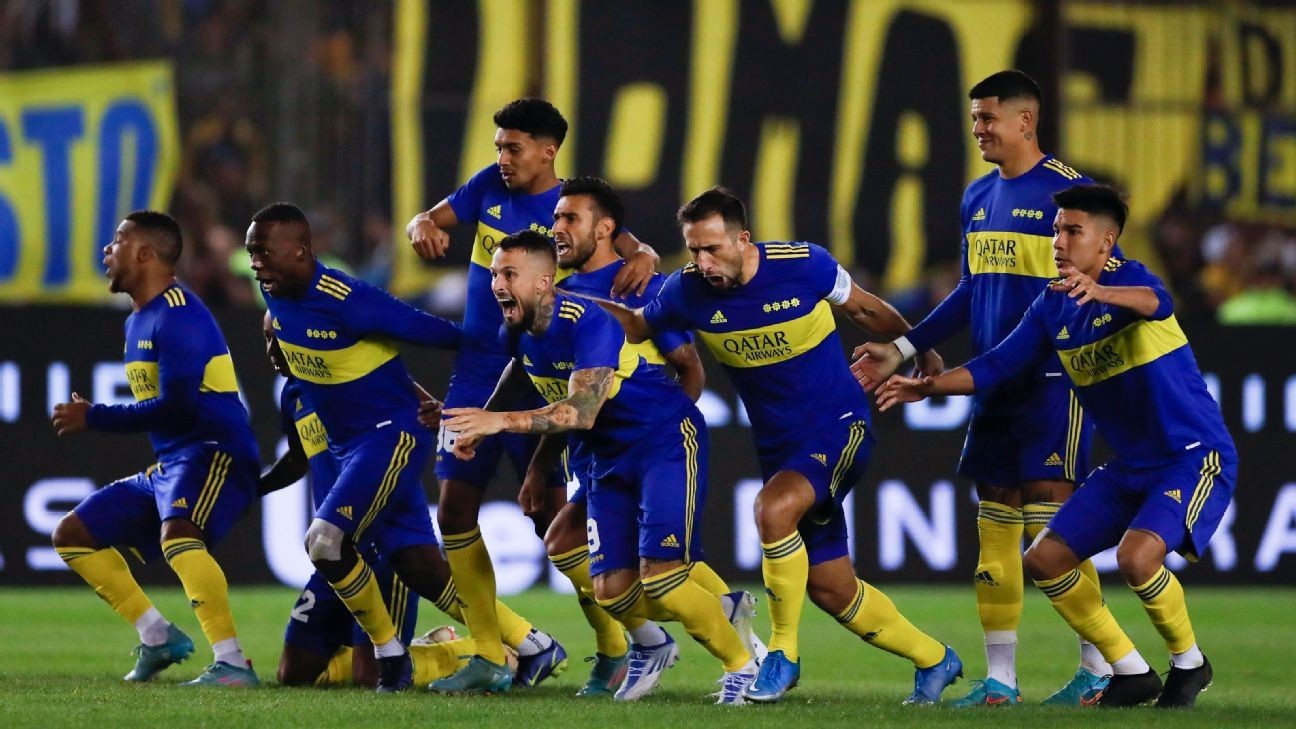 Over the next week, Buenos Aires giants Boca Juniors will seek both to avert disaster and to grab glory.

The first part of this contradictory double act comes on Tuesday night in the Copa Libertadores when they are at home to Corinthians of Brazil. Boca have a special relationship with the Libertadores. They have won the tournament six times, four of them between 2000 and 2007. Since then they have accumulated frustrations, losing two finals and four semifinals. And few of those slips were more frustrating than last year's, when they lost in the second round in controversial circumstances to Brazil's Atletico Mineiro.

Revolted, not entirely without justification, by refereeing decisions, several of the players ended up clashing with local police after elimination. As a consequence, lengthy suspensions were handed out to probably their two most important players, former Manchester United defender Marcos Rojo and Colombian winger Sebastian Villa.

Four games into the 2022 Libertadores, neither player has been able to play in the competition so far, and both will miss Tuesday's game. It has been tough to get by without them. Boca went down to 2-0 group stage defeats away to Deportivo Cali of Colombia and in Sao Paulo against Corinthians. They gave themselves a lifeline in the last round, digging deep in the demanding conditions of extreme altitude to come back from Bolivia with a 1-0 win over the splendidly named Always Ready.

But Boca's place in the knockout phase is by no means secure. If they fail to win on Tuesday they will almost certainly end the round in third place in their group -- and only the top two go through. And Corinthians are currently top of the Brazilian league. With a squad that includes former European-based players such as Willian, Renato Augusto and Giuliano, they should have way too much experience to be affected by the atmosphere the Boca fans will surely create. They are likely to be missing one player with World Cup appearances to his name -- right back Fagner is struggling to shake off an injury, making it all the more galling for Boca that Villa is suspended. All the other pre-tournament favourites are sitting in relative comfort, while Boca look set to sweat all the way to the finish line if they are to stay alive in the Libertadores.

While Boca Juniors are teetering in Copa Libertadores action, they can still win a domestic title. Gustavo Ortiz/Jam Media/Getty Images

But on the other hand, Boca are just a few days away from contesting a domestic title. This coming weekend they will play against Tigre in the final of Argentina's Copa de la Liga -- a clumsy name for a strange competition. Argentine football has gone through a strange few years, with a power vacuum at the centre while competing forces argue about organisational issues; who should organise the championship, what should be the format, how many teams should be included?

The first division is now made up of 28 clubs -- an awkward amount. The solution in recent times has been to divide the year in two. The second half follows a pure league format, with the teams playing each other once, and the club with most points winning the title. In the first half, the format is more like a cup competition. The teams are divided into two groups, with the top four in each going into quarterfinals. This year there is added haste, with the need to end club seasons in time for the World Cup.

This Cup of the League meandered along for fourteen weeks -- and then, suddenly, picked up in rhythm. Defensa y Justica won their place in the quarterfinals last Sunday. On Tuesday they were back in action against Boca in a one-off match with a semifinal place at stake. They were well beaten -- and Boca may have been flattered by the situation, made to look better than they are by their opponent's lack of preparation time.

On Saturday Boca were back in action in the semifinal against Racing -- unbeaten in the championship and impressively coached by former international midfielder Fernando Gago. Racing had all the chances -- but could not take any. Boca did not manage a single clear chance in the 90 minutes. But at full time, it went straight to penalties with Boca surviving to book their spot in the final.

Their opponents for the May 22 final in Cordoba will be Tigre, who shocked River Plate in the quarterfinal and then got past Argentinos Juniors in the semifinal. A traditional club from the north of Buenos Aires, Tigre have one major title to their credit -- an early version of this very competition. In 2019 they were relegated to the second division. Relegation in Argentina is based on performances over three years, and it was the previous seasons that dragged them down.

But that year, Tigre's performances in the Cup of the Superleague (as it was then called) were good enough to make it to the knockout phase, where they fought their way through to the final -- and beat Boca Juniors. Now they meet again, one in a search for salvation, the other in the quest for glory.