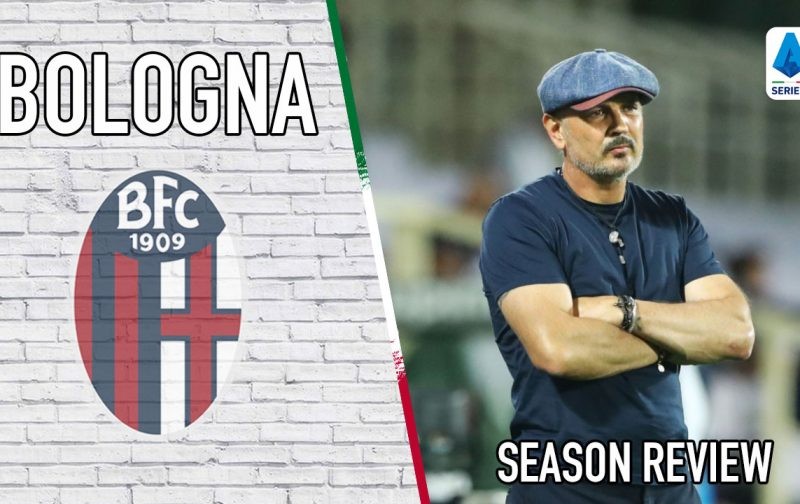 It was a season filled with inconsistency for Bologna when there were times when they could have a great run of form before a losing streak would soon follow.

The Felsinei finished 12th on the Serie A table with 47 points and on their day were one of the most entertaining teams to watch. They also looked to threaten for a Europa League spot the very early stages of the campaign but such a challenge was not sustainable.

Despite what Bologna did on the pitch, the main topic of conversation was their coach Sinisa Mihajlovic, who was diagnosed with leukemia in July 2019. After three rounds of chemotherapy and a bone marrow transplant, he returned to the bench for the remainder of the 2019/20 season, wearing a now trademark beret.

Player of the Season: Riccardo Orsolini The Italian starlet might not have been the most consistent performer but he has been involved in several Felsinei goals throughout the season. Orsolini played 37 times in Serie A and scored eight goals; with Musa Barrow scoring one more than him. The right winger also provided the most assists with eight, sharing that distinction with midfielder Roberto Soriano.

Capable of producing something magical, arguably his best goal was in the 3-2 victory away to Lecce in Round 17. The left footer scored his second goal in that game with a couple of stepovers to beat and defender and then smashed the ball into the net on his weaker foot. With Federico Santander offering little more than a physical presence and Rodrigo Palacio being used as a false nine, Bologna needed a natural striker that could actually put the ball into the back of the net.

Barrow arrived in January from Atalanta on loan with an obligation to be bought for €13 million and he has been sensational for the Felsinei, scoring nine goals and providing three assists in 18 league matches. The 21-year-old added a finishing touch up front but his overall play is impressive too. He is blessed with great pace so he can unsettle opposition defenders and his combination play with teammates has been superb. Since he replaced Filippo Inzaghi in January 2019, the Serbian tactician has often implemented the 4-2-3-1 formation and occasionally used a standard 4-3-3 formation. Most of Mihajlovic’s teams were workmanlike sides built around solid defences but his Bologna side has been more pleasing on the eye. He has had more creative players to work with but he has also found roles in which they can perform in.

The Felsinei coach has an ability to develop young talent, which is ideal for players like Orsolini, Barrow, Musa Juwara, Takehiro Tomiyasu and Mattias Svanberg to gain experience and improve their game. Despite all this, 2019/20 should be remembered for how Mihajlovic fought leukemia and found the strength to coach Bologna. His assistant Miroslav Tanjga took charge in the early stages of the campaign but he would still watch games from his hospital bed and sit in the stands whenever he was permitted to do so.

Bologna faced Inter in Round 30 at the Stadio Giuseppe Meazza and they were trailing at half-time after Romelu Lukaku gave the Nerazzurri the lead. The Felsinei went down to 10 men after Roberto Soriano was sent off for dissent but Lukasz Skorupski gave his team hope when he saved a penalty from Biscione forward Lautaro Martinez.

Youth team product Musa Juwara came off the bench and equalised for Bologna, Inter went down to 10 men too after Alessandro Bastoni got his second yellow card and Barrow scored the winner 10 minutes from time. Not having Mihajlovic early on did not help the situation and they won just once in 10 matches between Rounds four and 13.

Their form at the tail end of the season was not much better, winning once in the last eight rounds – which was against relegated side Lecce – and they suffered a 5-1 defeat to AC Milan and a 4-0 thumping against Fiorentina.