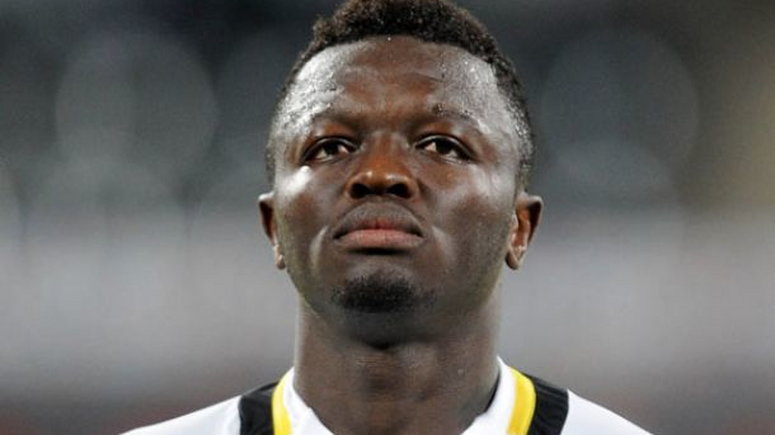 Sulley Muntari has been accused of insulting Kwesi Appiah in Lesotho

Ex-Ghana coach Kwesi Appiah has revealed that Sulley Muntari insulted him using unprintable words in the presence of all the Black Stars players after the controversial midfielder refused to be substituted during a 2014 World Cup qualifier.

The former Black Stars coach said the former Inter Milan player rained the insults on him in the dressing room in the presence of everyone after Ghana won the match 2-0 in Maseru.

Appiah, who was then in charge of the Black Stars as the coach, went to the dressing room to congratulate his players after the hard fought win when Muntari angrily confronted him.

The midfielder's misbehavior came after he refused to be substituted by Emmanuel Agyemang-Badu in the 60th minute of the match before shocked Lesotho supporters booed him off the pitch.

Muntari crudely refused to sit on the bench after refusing to be substituted for five minutes before preparing to verbally assault his coach in the dressing room in the full glare of the players.

Appiah made the shocking revelation in his autobiography titled “Leaders Don’t Have to Yell’ which has gone on sale in country and made some deeply hidden secrets of the Black Stars.

Narrating the incident in Lesotho, Appiah said: “During a World Cup qualifier against Lesotho, I called for Emmanuel Agyemang Badu to substitute Sulley around the 60th minute. For five minutes, Sulley ignored my call and would not come off.

“When he finally did, he angrily headed straight for the dressing room instead of joining the rest of the team on the bench. We finished that game 2-0 and I was congratulating the team in the locker room.

“Sulley was still upset and made a comment that featured inappropriate words. As much as he wanted to play, I did not feature him for the next next three games.

“When there’s no clear line of respect, it is very likely that the players will not take their coach seriously. Even though I can be very friendly with my players, there’s a line of respect that my players are not allowed to cross.”

It is clear following Appiah's revelation that the robbery suffered by Muntari and Asamoah Gyan after the match, clearly overshadowed the then AC Milan's player's insults at coach Appiah.

This is the latest revelation of the worrying disciplinary record of the former Inter Milan after he physically assaulted a management member of the national team at the World Cup in Brazil.

Appiah’s latest revelations lay credence to rumours of deep-rooted indiscipline in the Black Stars that has been a major barrier in the team’s quest to win a trophy for Ghana.

Players and other staff of the team have often been accused of being disrespectful to their coaches and Appiah’s claim seem to validate those reports.

In the 2019 AFCON for instance, some players were said to have defied an order by the coach not to allow ‘strangers into the hotel rooms” by bringing in their girlfriends.