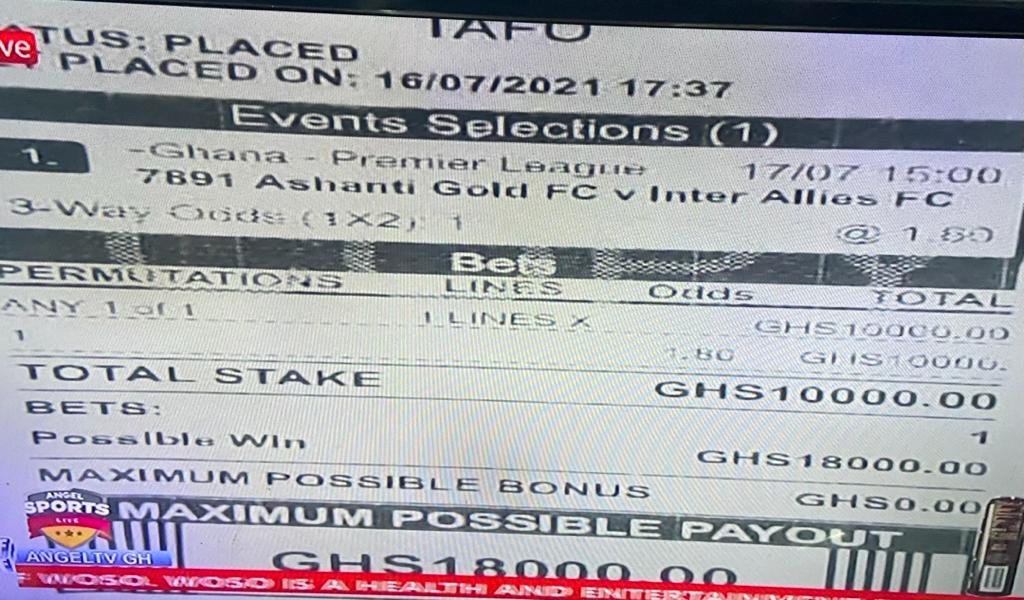 Details have emerged from the match-fixing scandal that has rocked Ghana football in the past 24 hours involving AshantiGold SC vs Inter Allies in the Ghana Premier League.

The game ended 7- 0 in favor of AshantiGold SC at the Len Clay Sports Stadium with suspicions of the match been fixed.

What raised the suspicions and curiosity was the two own goals scored by Inter Allies defender Hashmin Musah.

Hashmin Musah came off the bench to score two bizarre own goals.

He later confirmed in an interview that the game was fixed thus the reason for scoring those two goals.

GHANAsoccernet.com has gathered evidence that proves the game had been staked on a betting platform with AshantiGold SC tipped to win the game with a three-straight win per the odds.

The bet was placed in Tafo in the Ashanti Region of Ghana at exactly 17:37 GMT which has been uncovered.

Information gathered indicates that the Bet was staked 24 hours before the game on Sunday which suggests that it had been fixed as speculated.

The ticket holder  won Ghc 18,000 as the game ended per the predicted score line.

Per the information available and the evidence provided that the match had been fixed, the Betting company can declare the ticket null and void.

The Betting company can also help with investigations by contacting the Police to arrest those involved.

Despite the Ghana Football Association opening investigations into the matter, they will need the help of the Betting companies to fish out those linked in the syndicate and punish those involved and their clubs.

According to World football's governing body FIFA, Betting on football matches – any match, anywhere and anytime is prohibited.

The Ghana Police Service has launched an investigation over suspicion of match-fixing which has tainted the 2020-21 Ghana Premier League season, GHANAsoccernet.com Headquarters can exclusively report.