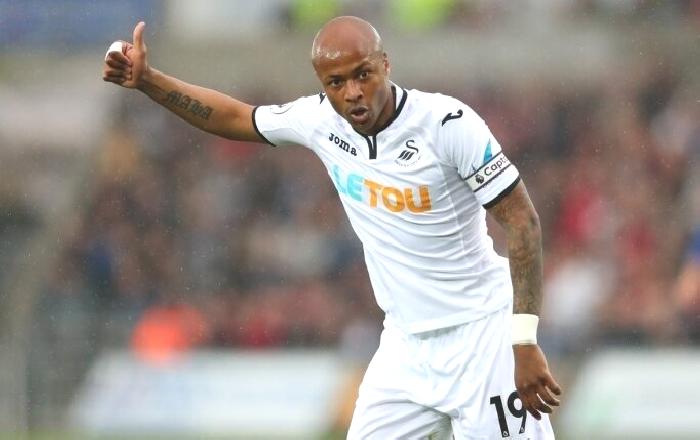 The 30-year-old will be tempted with an offer of $200,000 PER WEEK without tax to force the superstar to make a quick decision to play in the Asian country - insiders have told Ghana's leading football news outfit.

Agents involved in the deal held a meeting on Tuesday night with officials of the Jeddah-based side to agree on the offer to make to the player and his club.

The insiders told Ghanasoccernet.com on Wednesday morning that they have agreed to table $50million to Swansea City and will lure the Ghana captain with $200,000 per week offer to play for them.

A meeting with Ayew's agents will be lined up in the coming days before the offer is made to the south Wales club to release their most important player for the past two seasons.

Ahly's interest in the son of Ghana legend Abedi Pele was sparked by the club's coach Vladan Milojevic who has been fascinated by Ayew's playing style and leadership qualifiers.

The Serbian coach was monitoring his player Samuel Owusu, who plays as a winger for Al-Ahli on loan from Al-Fayha, during last week's 2021 Africa Cup of Nations qualifier against Sudan.

The performance of Ayew who scored both goals during the match and his leadership style attracted the coach who has now told the ambitious side to sign Ayew to boost their campaign this season.

It is in furtherance of this request for the Ghana captain that top agents operating in the Middle East have been approached to help secure the deal to sign the utility player.

Ahli are keen on signing Ayew during the January transfer window but it is not known if Swansea City would be keen on releasing their key player who has been instrumental in their successes so far this season.

He has been in a blistering form for the Swans so far this season having scored five goals in 11 matches from midfield.

Ayew is one of the most experienced players in world football today after playing from Olympique Marseille and Lorient in France, Fenerbahce in Turkey and West Ham in England.