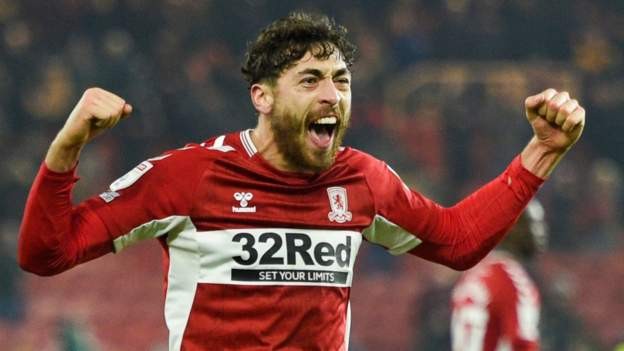 Matt Crooks scored a 95th-minute winner as in-form Middlesbrough came from behind to beat Reading and make it six wins in seven Championship games.

Former England striker Andy Carroll scored his second goal for Reading as they bounced back from a 7-0 thrashing by Fulham to take the lead.

Middlesbrough had come closest in a goalless first half with a Jonny Howson shot deflected just wide and a rebound off Reading defender Josh Laurent after Luke Southwood had saved from Andraz Sporar hit the post.

They drew level when Crooks headed past Southwood and in added time he met Isaiah Jones' cross for his second to move Chris Wilder's side up to sixth in the table.

The Royals remain 21st, just three points clear of the relegation places, and have now failed to win in their last six visits to the Riverside Stadium.

Boss Veljko Paunovic resisted the temptation to make wholesale changes after the embarrassing result against Fulham, with Andy Rinomhota coming in for Scott Dann as the only change to the starting line-up.

Boro had the better of the opening 45 minutes with recent loan signing from Brighton Aaron Connolly twice going close, but found themselves behind just before the hour when Carroll found the net with a looping header from Tom Dele-Bashiru's cross.

Reading pushed for a second as John Swift's right-foot shot forced a save from Joe Lumley, only for Marcus Tavernier to pick out Crooks, who made no mistake from his cross.

Lumley saved from Laurent as the clock ticked beyond 90 minutes, but it was Middlesbrough who came up with the winner as Crooks took his tally for the season to six goals - just four days short of a year since his last double, for Rotherham against Stoke in a 3-3 draw.

Goal! Middlesbrough 2, Reading 1. Matt Crooks (Middlesbrough) header from very close range to the high centre of the goal. Assisted by Isaiah Jones with a cross.

Attempt saved. Josh Laurent (Reading) right footed shot from the left side of the box is saved in the top centre of the goal. Assisted by Tom Dele-Bashiru.

Marcus Tavernier (Middlesbrough) wins a free kick in the defensive half.

Andy Carroll (Reading) wins a free kick in the defensive half.

Attempt saved. Matt Crooks (Middlesbrough) header from the centre of the box is saved in the top right corner. Assisted by Andraz Sporar.

Attempt missed. Andraz Sporar (Middlesbrough) header from the centre of the box misses to the left. Assisted by Marcus Tavernier with a cross following a corner.