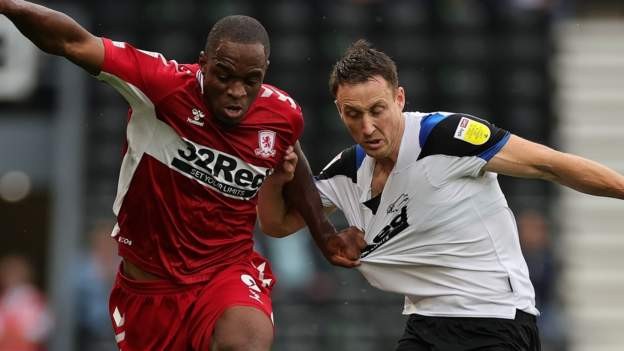 Middlesbrough say they are willing to discuss a possible compromise in their action for compensation against Derby.

Both Boro and Wycombe have outstanding claims against the Rams, who have been in administration since September.

They are both claiming loss of income because of breaches of English Football League financial rules by Derby.

"MFC has made clear that it does not wish to see Derby County fall into liquidation," said a statement on the Middlesbrough website.

Boro also say they are "happy to be realistic" in their expectations in order to help the Derby administrators complete a takeover deal.

"However, it is ultimately up to the administrators or the new owner to put a firm and realistic proposal forward or merely agree that MFC's claim, when finally determined, will be met in full by the new owners," the statement continued.

Derby manager Wayne Rooney was expecting administrators Quantuma to name a preferred bidder for the club last week, but it is understood that none of the three interested parties are willing to proceed without the Middlesbrough and Wycombe issues being resolved.

EFL chief executive Trevor Birch said on Monday: "We are aware that Derby County consider the claims to be spurious, but despite this, the current bidders appear unwilling to assume the risk of defending them."

Middlesbrough say they first made a claim against Derby in May 2019 after the Rams pipped them to a place in the play-offs and arbitration began in January last year, but they claim the East Midlands club used "various procedural tactics" to hold the matter up.

"There is a certain inconsistency to the arguments presented by the administrators," the Boro statement added.

"On the one hand, it is said that there is no prospect of the claim succeeding, in which case there is no risk for a new owner. But, on the other hand, the administrator apparently cannot find a new owner because they will not proceed without the claim being settled due, presumably, to the fact that it has merit and might succeed.

"If the claim has no prospect of success MFC does not understand why a new owner would resolve the matter by accepting that the arbitration decision should be honoured."

Derby have had 21 points deducted this season for going into administration and financial breaches, but climbed off the bottom of the Championship table on Saturday with a home win over Sheffield United.

Rooney believes they can avoid relegation to League One but they were not able to give defender Phil Jagielka a new contract and sold Graeme Shinnie to Wigan for a nominal fee after the EFL asked the administrators for proof of funding for the remainder of the season.

"MFC has made it clear since the administrators were appointed that it was happy to discuss how the claim is dealt with and whether a compromise could be reached with the administrators or the new owner," the Boro statement said.

"The administrators contacted MFC in November 2021. However, there has been no contact at all since then, until this week."