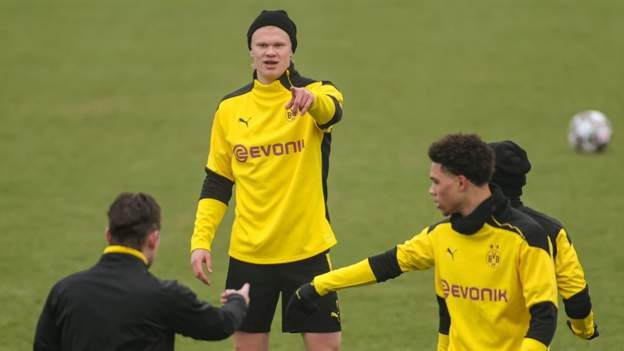 Borussia Dortmund striker Erling Braut Haaland is expected to be fit for their Champions League last-16 second leg with Sevilla - but Jadon Sancho is out.

Haaland scored twice in Saturday's 4-2 defeat by Bayern Munich but went off after 60 minutes with a cut on his ankle.

"Erling looks unaffected by it and we expect him to be there," interim boss Edin Terzic said.

Haaland scored twice in the first leg with Sevilla, which his side won 3-2.

Dortmund will be without England winger Sancho for several weeks, which would also see him ruled out of the upcoming England squad.

Giovanni Reyna and Raphael Guerreiro are also doubts for the second leg.

Julen Lopetegui's side have lost four of their past five games - starting with the first leg - after winning the previous nine in all competitions.

"We expect a very good match from Sevilla, even if their last few results haven't been great," said Terzic.

"We are preparing for them to show a very different intensity in Dortmund. Sevilla will be a different team tomorrow.

"We have to be better than we were in Sevilla."

Borussia Dortmund are unbeaten in their past seven home games in the Champions League. Sevilla have won their previous two away games in the competition.Sevilla have never gone through in a European Cup/Champions League knockout tie after losing the first leg, going out against Real Madrid in 1957-58, Fenerbahce in 2007-08 and Bayern Munich in 2017-18.Dortmund's Edin Terzic is looking to become the fourth German manager to win his first two Champions League games, after Josef Heynckes, Klaus Toppmoller and Hans-Dieter Flick. All three managers reached the final in those seasons.Dortmund's Erling Braut Haaland could become the first player in the history of the competition to score two or more goals in four consecutive appearances.Haaland has scored 18 goals in 13 Champions League appearances - the quickest a player has ever reached 20 goals is 24 appearances, achieved by Harry Kane.

DeLorean: Back from the Future: How a fairy tale went horribly wrongSnowfall: A new drug hits the streets of LA and changes the game forever...