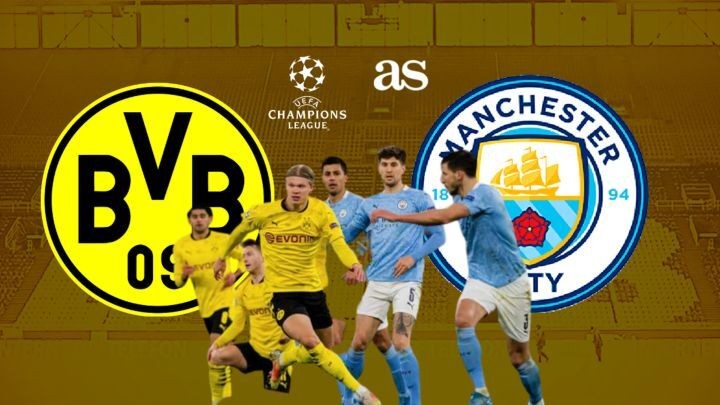 All the info you need on how and where to watch Borussia Dortmund vs Manchester City at the Signal Iduna Park on 14 April at 15.00 EDT / 21:00 CEST.

Manchester City will try to avoid any surprises this season to progress to the semi-finals of the Champions League against Borussia Dortmund at the Signal Iduna Park in the second leg of their quarter-final clash.

The Bundesliga side managed to score in the closing stages of the first leg and thought they had done enough to earn a 1-1 draw, but Phil Foden handed the advantage to The Citizens by finding the net late on to make it 2-1.

Dortmund can cause problems for City

It was not Erling Haaland’s best night, but Marco Reus made the Black and Yellow fans dream for a short while. Even though Dortmund lost, 2-1 is a dangerous scoreline and anything can happen in the return leg.

Pep Guardiola is aware of that and of the fact that in the Champions League there is a very fine margin for error. But he will also be aware that Edin Terzic’s men have only won two of their last seven games across all competitions.

Dortmund are sitting fifth in the Bundesliga with 46 points, seven behind Frankfurt in fourth. The Black and Yellow are 19 points behind leaders Bayern, so their goal for the season is to try to qualify for the Champions League via domestic position.

City, meanwhile, have enjoyed a good season so far, leading the Premier League quite convincingly and also impressing in Europe.

Moreover, Guardiola’s squad haven’t been defeated in Europe this season and had kept seven clean sheets in a row before Reus scored in the first leg.

Jadon Sancho remains sidelined with a thigh problem, while Axel Witsel, Dan-Axel Zagadou or Marcel Schmelzer will also miss out. Reus and Mats Hummels are expected to be ready against City.

Haaland has now gone six games without a goal, but he is yet to draw a blank at home in the Champions League.

As for the visitors, City's treatment room has been unoccupied for the past few weeks, but Sergio Agüero and Aymeric Laporte have suffered injuries recently and could miss out.

Guardiola could make some changes after his team’s defeat to Leeds, meaning that Ruben Dias and Kyle Walker could replace Nathan Ake and Benjamin Mendy in defence.

Rodri and Ilkay Gundogan could also take Fernandinho and Oleksandr Zinchenko’s spots, while Riyad Mahrez, Phil Foden and Kevin De Bruyne should be the attacking trio.

What time does Borussia Dortmund vs Manchester City start?

The 2020/2021 Champions League quarter-finals second leg between Borussia Dortmund and Manchester City will be played at the Signal Iduna Park (Dortmund) and will kick off at 3pm EDT on Wednesday 14 April 2021.

Find out what time Borussia Dortmund vs Manchester City gets underway where you are in the world.

Where can I watch Borussia Dortmund vs Manchester City?

No matter where you are on the planet, you can see what channel the Borussia Dortmund vs Manchester City match is available on here.

Is the Borussia Dortmund vs Manchester City game online?

Borussia Dortmund-Manchester City is available in most nations through the rights holders’ online platform, if they have one. The best option is to check who is showing the game in your country and if they have an online service or Ios/Android app to watch it on.