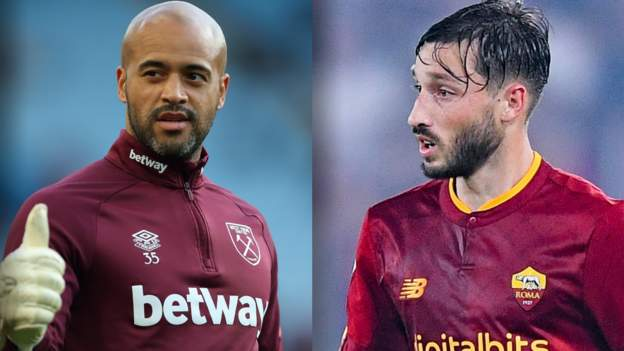 Bournemouth have agreed to sign goalkeeper Darren Randolph on a permanent deal from West Ham and Roma defender Matias Vina on loan for the rest of the season.

Randolph joined West Ham from Middlesbrough in January 2020 but has made only 10 first-team appearances, the last of which was in May 2021.

The 35-year-old still has 18 months left on his Hammers contract.

However, he had little chance of senior action at London Stadium.

By accepting the offer to join Bournemouth he will provide competition for first-choice keeper Neto, who has just returned to action following a hamstring injury.

Vina was part of Uruguay's World Cup squad but has not played for Roma since his return from Qatar and has started just one Serie A game this season.

The 25-year-old left-back brings additional experience to Gary O'Neil's squad, which new owner Bill Foley has vowed to strengthen before the transfer window closes in a bid to avoid relegation.

Should they complete their transfers Randolph and Vina could be in the Bournemouth squad for the Premier League trip to Brighton on 4 February.

The Cherries are also close to signing Senegal forward Nicolas Jackson after agreeing a 23m euro (£20.3m) deal with Villarreal on Tuesday.

They have already spent about £20m on Burkina Faso winger Dango Ouattara, who made his debut against Nottingham Forest on Saturday following his move from French side Lorient.

Visit our Bournemouth page for all the latest Cherries news, analysis and fan viewsYou can now get Bournemouth news notifications in the BBC Sport app - find out more