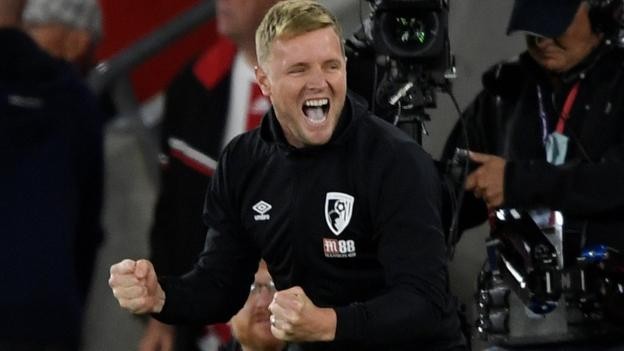 Bournemouth manager Eddie Howe says they "need to keep grounded" after moving up to third in the Premier League with a first win at Southampton.

"You want the players brought down to earth because you want the focus on consistent success," Howe said.

"We needed to show our heart to see the game out."

On moving into the top four before the rest of the weekend's games, he said: "That's a very nice feeling at this early stage but that's all it is.

"It was a nice moment. We rarely get those moments in football where you get that pure emotion and joy for a few seconds. Then you start thinking about next week."

How far can Howe take Bournemouth? Cherries win at Southampton for first time

Bournemouth looked in control at half-time, but Ward-Prowse's goal - one of Southampton's 25 shots - set up a tense finale, before Callum Wilson took advantage of a defensive error to score in injury time.

"It was probably the easiest goal I will score," said Wilson. "A gift. But that's what you get for being patient. We weren't at our best, the final pass was poor.

"We are starting to be more consistent. We would probably have drawn that 2-2 in previous seasons. The defence was resilient and we got our rewards at the end.

"In periods we were good. Devastating at times. But we were also sloppy too. We are making more history with the boys and progress with the team."

It was Bournemouth's first ever win at Southampton after six draws and nine defeats in their first 15 visits.

Howe said: "In the first half we were OK. We didn't hit the heights we are capable of. We were scrappy and didn't keep the ball as well as I wanted but we had spirit and sometimes that's the most important thing.

"In the second half, we were reactive and looked tired. There were some heroics from our goalkeeper too."

Southampton manager Ralph Hasenhuttl said his side "lost the game in the first half".

"In the second half we were sharp," he said. "We weren't aggressive enough and too easy in the first half. It is not easy to be 1-0 down after 10 minutes.

"We had a lot of blocked shots and misses near the post. It was a good performance in the second half but without a result."