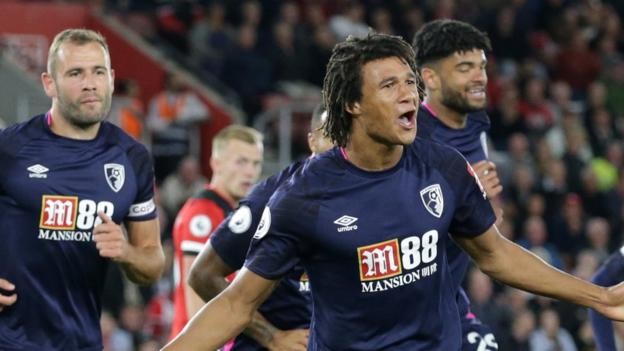 Bournemouth survived a second-half fightback from Southampton to secure a fully deserved win at St Mary's and move into third place in the Premier League before the weekend's games.

The Cherries also had a goal from Joshua King ruled out for offside by the video assistant referee as they were in complete control for the first 45 minutes.

Southampton snatched at a lifeline when James Ward-Prowse scored from the spot eight minutes after the break following Steve Cook's clumsy challenge on Che Adams.

Bournemouth felt they had a credible penalty claim ignored by VAR when Cedric Soares tangled with King but they came through in relative comfort and wrapped up the win with virtually the last kick of the game when a misunderstanding between Southampton goalkeeper Angus Gunn and Jan Bednarek left Callum Wilson with an open goal.

Bournemouth's travelling fans celebrated wildly and acclaimed manager Eddie Howe at the final whistle as this impressive victory lifted them to the lofty heights of third in the Premier League.

And for all Southampton's huffing and puffing in the second half, the Cherries were by far the more composed, powerful and clinical team and fully merited the three points.

Bournemouth overpowered Southampton during the first 45 minutes, taking full advantage of a lacklustre Saints showing by demonstrating class in midfield and pace in attack to establish a stranglehold on the game.

Their approach was symbolised by the slick passing move that led to Harry Wilson's goal after 35 minutes. King played in Billing, whose perfect reverse pass was met by the youngster arriving with perfect timing to complete the job to score for the third time since joining on loan from Liverpool.

Bournemouth were resolute when Southampton finally roused themselves after the break, as they had to do, but that ever-present threat on the counter was their most potent weapon and was evident even before that communication breakdown between Gunn and Bednarek left Callum Wilson to complete the formalities.

This was impressive stuff from Bournemouth, who deserve to enjoy what may be a brief spell in the top three - but the fact they are never even mentioned as a club that may struggle in the Premier League is simple testimony to Howe's work.

Southampton gamely battled their way into contention in the second half and occasionally threatened to grab what would have been an undeserved draw but they paid the price for a mess of a first 45 minutes.

Manager Ralph Hasenhuttl has had plenty of praise since arriving on the south coast but only he can explain the muddled thinking that left Saints totally unbalanced and a shambles for that crucial period.

The Austrian mysteriously played Soares, a Portugal right-back, at left-back and a central defender in Kevin Danso at right-back - with an England left-back in Ryan Bertrand on the bench.

The results were predictably chaotic as King ran Danso ragged and Soares, understandably, looked out of sorts in his accustomed position.

Hasenhuttl made the predictable adjustments at half-time, sending on Bertrand for Danso and putting Soares on the right, where he performed admirably.

Sadly for Southampton, the damage had been done and Hasenhuttl must take his share of responsibility for this disappointing defeat.

Next up for Southampton is the 'proper' South Coast derby, at Portsmouth in the Carabao Cup on Tuesday. Bournemouth go to Burton the following day.

Both sides have 15:00 BST kick-offs in the Premier League next Saturday, Bournemouth are at home to West Ham and Southampton are at Tottenham.

Attempt missed. Jannik Vestergaard (Southampton) left footed shot from the centre of the box misses to the left. Assisted by Ryan Bertrand with a headed pass.

Attempt saved. Sofiane Boufal (Southampton) right footed shot from outside the box is saved in the centre of the goal.

Attempt blocked. Danny Ings (Southampton) left footed shot from the left side of the box is blocked.

Attempt missed. Philip Billing (Bournemouth) left footed shot from outside the box is close, but misses to the left from a direct free kick.

Nathan Aké (Bournemouth) wins a free kick in the attacking half.

Attempt missed. Danny Ings (Southampton) header from the centre of the box is too high. Assisted by Cédric Soares.

Attempt missed. James Ward-Prowse (Southampton) right footed shot from the centre of the box misses to the left. Assisted by Danny Ings.

Attempt missed. Pierre-Emile Højbjerg (Southampton) header from the centre of the box misses to the right. Assisted by Ryan Bertrand with a cross.

Oriol Romeu (Southampton) is shown the yellow card for a bad foul.

Oriol Romeu (Southampton) wins a free kick in the defensive half.

Attempt blocked. Nathan Redmond (Southampton) right footed shot from the centre of the box is blocked.

Jack Stacey (Bournemouth) wins a free kick in the defensive half.

Attempt missed. James Ward-Prowse (Southampton) right footed shot from outside the box misses to the right. Assisted by Sofiane Boufal.

Attempt saved. Sofiane Boufal (Southampton) left footed shot from outside the box is saved in the top left corner. Assisted by Oriol Romeu.

Jack Stacey (Bournemouth) is shown the yellow card for a bad foul.

Ryan Bertrand (Southampton) wins a free kick in the defensive half.

Attempt missed. James Ward-Prowse (Southampton) right footed shot from outside the box is just a bit too high. Assisted by Che Adams.

Dominic Solanke (Bournemouth) wins a free kick in the attacking half.