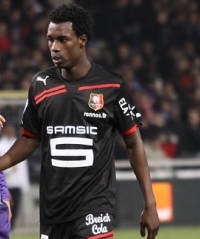 John Boye has confirmedÂ receivingÂ a late invitation to join the Ghana camp ahead of their Nations Cup qualifier against Swaziland on Friday.

The Rennes defender was called in as replacement for Black Stars captain John Mensah who has suffered a hamstring injury.

The 24-year-old however hopes toÂ seizeÂ the opportunity to make a clear case for subsequent invitations to the national team camp.

"I was called to be made aware of my call-up and was also informed of my travel arrangements," he told Kumasi-based Angel FM.

"Everybody has his style of play so when you get the chance you have to prove to the people what you are capable of doing.

"If it is enough, the coach would give you more opportunities and this is what I hope to do."

Boye's last called up into the Black Stars squad was in the previous clash with Swaziland last year.

But impressive performances for the French side in their league and Europa League has prompted coach Goran Stevanovic to hand him a return to the team.

Boye was highly rated when he got his call-up into the Black Stars three years ago in the first round of the joint 2010 Nations Cup/World Cup qualifiers.

But the lanky centre-back struggled for first team football when he moved to Rennes from local side Heart of Lions in the summer of 2008.

He has now stormed into the first team of Rennes and has put up some impressive displays.

He is expected to in town on Tuesday and would immediately join his teammates in camp to round off preparations for the game on Friday.