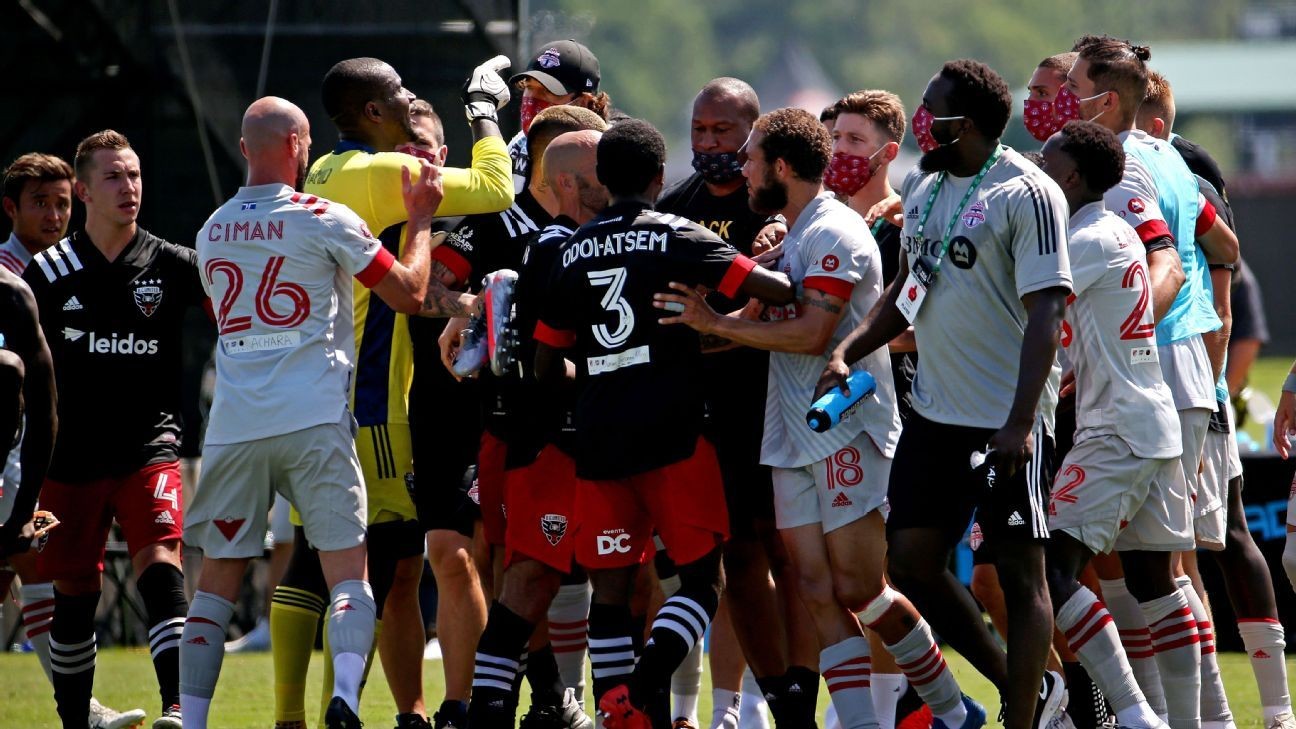 Toronto FC captain Michael Bradley said he felt that D.C. United players were "pissed off" and "angry" due to the circumstances surrounding Monday's ill-tempered 2-2 draw.

D.C. United came back to take a point off Toronto in testy affair that had been twice rescheduled at the MLS is Back Tournament, before finally going ahead on Monday morning.

Both teams woke up on Sunday ready to play, before receiving news of a positive coronavirus test for D.C. United and an inconclusive one for Toronto, forcing the postponement of the game. Subsequent retests, which came back negative for both squads, were carried out.

"From their side we've gotten a real sense that they're all pissed off and angry that we showed up late," stated Bradley after Monday's match. "Almost feeling like we're trying to cheat the system or get a leg up on everybody and that obviously couldn't be further from the truth."

Toronto had arrived to ESPN's Wide World of Sports outside Orlando, Florida, only six days ahead of Sunday's planned opener, which had originally been scheduled for last Friday.

"We're in the middle of a pandemic, we're trying to look after ourselves and each other and, in turn, look out for any of the teams we play against, so in the meantime if there are some big gaps in certain protocols, or guys don't feel well on days that you're supposed to travel, or you wake up on the morning or one game and someone has tested positive, it seems to be that prudence and caution have to come first right now," Bradley continued.

Toronto had taken a 2-0 lead before halftime thanks to two goals from Ayo Akinola. D.C. United then went down to 10 players when Junior Moreno received his second yellow card in first-half injury time.

Late goals from Federico Higuain and Frederic Brillant turned the game on its head to seal a 2-2 draw and saw friction between the two sets of players boil over on the final whistle.

"Part of it is just football," Bradley said. "On a hot, humid day you have a team that goes down 2-0 and with one man less is able to come back and get a point from the game, so they're obviously excited, we're disappointed, so part of it is that. That's normal, that's football."

MLS is Back's 9 a.m. kickoffs present clubs with unique challenge. Will late-night starts be even tougher?MLS is Back Tournament viewer's guide: The matches, players and stories you can't afford to miss

D.C. United coach Ben Olsen was delighted at his team coming from behind in hot and humid conditions and didn't mince his words about the opposition.

"It's no secret that a lot of our guys are a little bit pissed off at how all this has played out," stated Olsen postgame. "A lot of it is out of their control, out of our control."

Olsen said that the teams had seen Toronto regularly in the hotel and had eaten close to one another, with the tension building up.

"It wasn't surprising that there was a dust-up, it didn't surprise me that it was a physical game and there was a red card," said Olsen. "It was always going to shake out that way -- both sides talking at each other. That's ok. It's done, it'll blow over and now we can focus on another team -- we've been essentially focused on Toronto for two full weeks."

"If you want to blame us, you can," said TFC coach Greg Vanney of the rescheduling. "That's fine. For them, that's maybe been their mantra to try to get them through the game and give them the best opportunity, to have that extra emotion. In the end we allowed them the opportunity to puff out their chests when we allowed them to come back from two goals down a man."