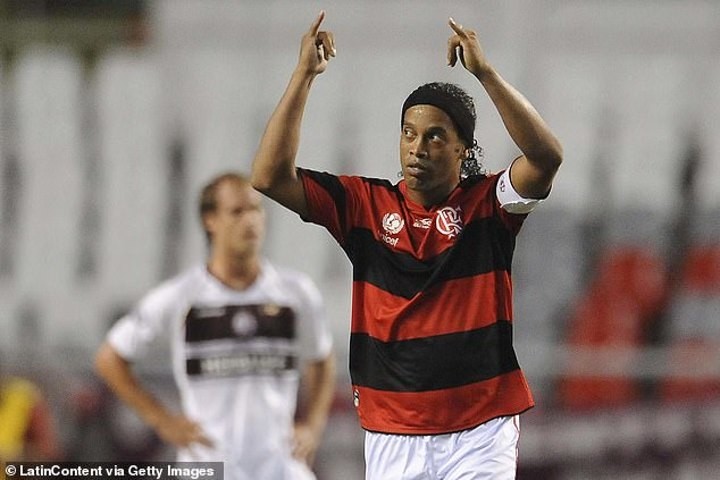 Ronaldinho astonishingly insisted on a 'nightlcub clause' in his Flamengo contract that entitled him to two nights out partying a week, it has been revealed.

The Brazilian star signed for Flamengo back in 2011 after spending three seasons with AC Milan.

According to beIN Sports, Ballon d'Or winner Ronaldinho made it clear that it would be a deal breaker if Flamengo didn't agree to his extraordinary demands.

Flamengo gave in in the end in effort to get Ronaldinho's signing over the line.

The former Barcelona star ended up scoring 19 goals and registering 13 assists in one year at the club.

Ronaldinho is widely considered one of the most talented footballers of his generation and was well-known for letting his hair down throughout his illustrious career.

There is a feeling the 40-year-old - who is currently under house arrest in Paraguay for the alleged use of forged passports - could have been even better if it weren't for his party-boy lifestyle.

One AC Milan fan even revealed that Ronaldinho would be spotted out on the town almost every weekend after matches.

'He would still find a party and enjoy himself long into the night.

'We loved him at Milan, but he hurt himself and his career, never worried who saw him.'

It was persistent partying which was said to have spelled the end for him at AC Milan with rumours he even used to skip Monday training sessions after weekend-long benders.

A former team-mate of Ronaldinho's, Patrico Rubio, previously revealed that the Brazil legend would 'hop onto his private plane after matches' to party in Cancun.

Ronaldinho also splashed out tens of thousands of pounds on celebrating his 32nd birthday at a luxury hotel in Rio de Janeiro, Brazil.

He was forced to spend his most recent birthday behind bars in Paraguay but has maintained his innocence for possession a fake passport.