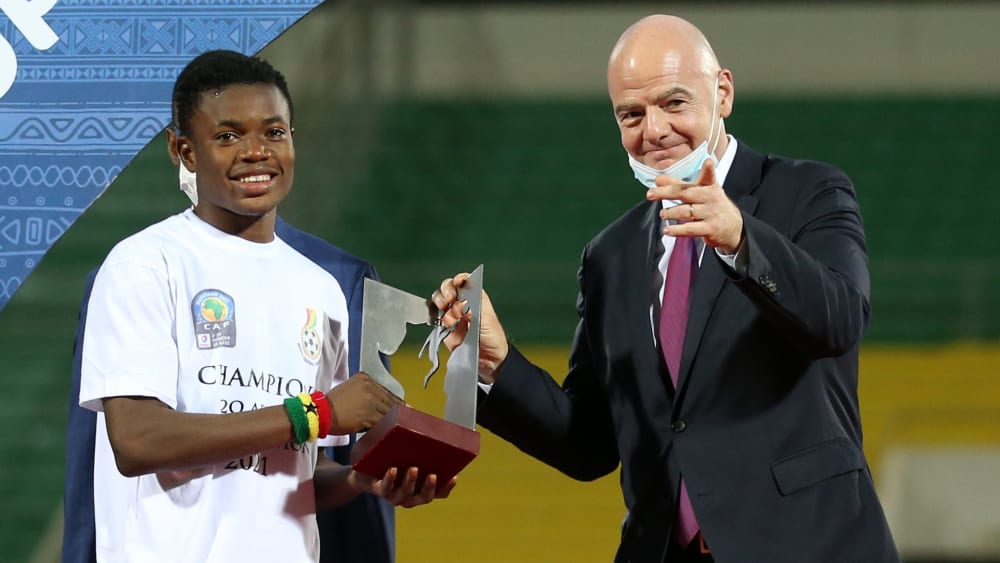 Was voted player of the tournament at the Africa Cup of Nations for U-20 teams: Issahahu Abdul Fatawu.
Share

Ghana's talented teenage star Issahaku Abdul Fatawu's move to Bayer Leverkusen collapsed on Thursday evening after his Nigerian agent was accsued of trying to pull a fast one on the German giants, one of Germany's leading newspapers has reported.

This comes after Ghana's leading football news outlet Ghanasoccernet.com exclusively revealed on Wednesday that Liverpool arec seeking to gazump the Germans even though the player has arrived in Germany to seal the deal.

The agent Peter Obiora Ejiasi has been accused of hawking the player to other clubs like Liverpool after they had arrived in Germany to seal the deal with the German side, according to a report in the Kicker.

The move of the agent, who is said to have started the career of Mubarak Wakaso in Europe, has now forced the German side to cancel the proposed deal and reveal their desire to send the player back to Accra.

The controversial agent is also said to be angling for other options which forced the German side to pull out of the deal sensing the controversies and lack of trust that might surround the talented player's career.

A picture posted by the player on Instagram from a hotel room that could be relatively easily identified as one from the Lindner Hotel Bayarena in Leverkusen. Another picture that Issahahu Abdul Fatawu, accompanied by his advisor Peter Obiora Ejiasi and the son of the club president of Steadfast FC, showed from the lobby of the hotel. The indications that Bayer would like to sign the 17-year-old talent from Ghana were clear.

But the transfer does not take place. For many reasons. In purely sporting terms, Bayer would have liked to have made the deal. Fatawu, who can act on the wings, but also centrally behind the tips, is considered a highly talented man, whose services Bayer would not have been able to fall back on until the 2022/2023 season.

Because before his 18th birthday, Fatawu, who will come of age in March 2022, is not allowed to sign a professional contract. He would not have received a game permit before that. The left-footed player, who was elected player of the tournament in February at the Africa Cup for U-20 teams as a 16-year-old, would have continued to play for Steadfast FC until March next season.

These framework conditions were clear to Bayer from the start. All sides seemed to be in agreement. But on Wednesday morning, when the deal was about to be watertight, matters took an unexpected turn. "Fatawu is a highly talented player and Bayer made a very good offer," says Michael Ruhnau, who put Bayer and Fatawu's agent in contact, "but I can understand those responsible for Bayer that they are because of Fatawus' dubious and disrespectful behavior Advisors have refrained from the transfer. "

Background: On Wednesday, Fatawu's advisor canceled the second and final date for sealing the deal with Bayer at short notice. Allegedly because the agent may have wanted to meet representatives of Liverpool on the same day. The latter was exposed because Fatawu had posted a video from his hotel room, during which a corresponding telephone conversation could be heard in the background, during which a meeting in Portugal was arranged for Wednesday afternoon. This meant that the Fatawu theme was over for Bayer 04 despite his talent.

The advisor's approach apparently has a method. Fatawu's agent has been peddling clubs like FC Basel, RSC Anderlecht, RB Salzburg, Ajax, BVB and Liverpool since March to drive up the price. Where Fatawu gets the best opportunity to develop seems to be of much less importance for the advisor.