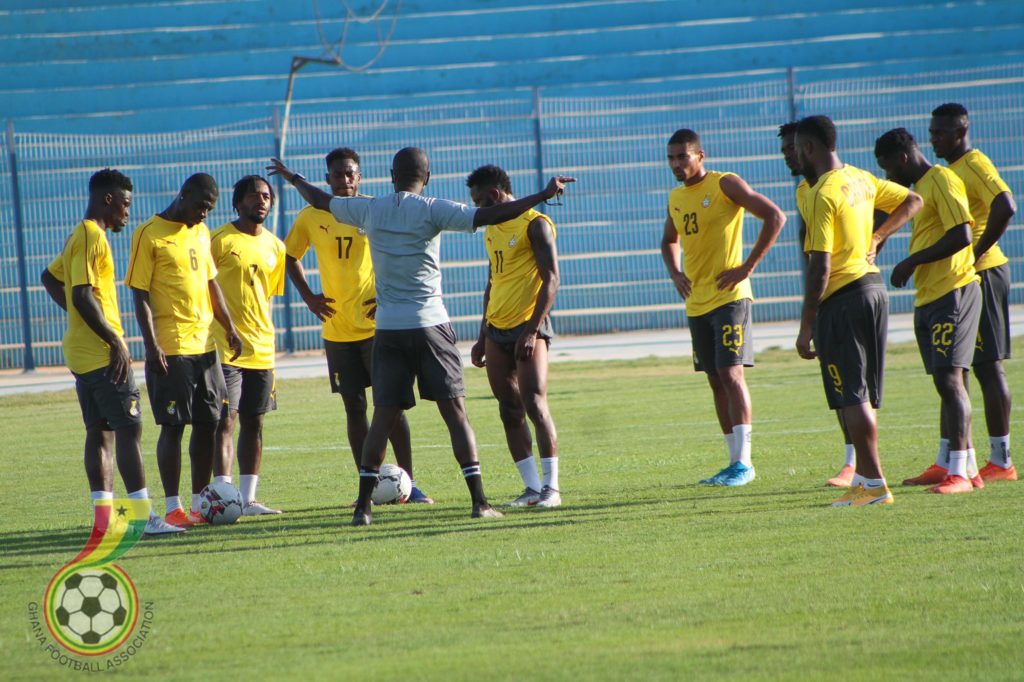 Black Stars training ahead of the match against Sudan in Omdurman

Ghana coach Charles Akonnor has unleashed Mubarak Wakaso and Jeffrey Schlupp in his crack starting line-up to face Sudan on Tuesday in their 2021 Africa Cup of Nations qualifier, Ghanasoccernet.com can exclusively reveal.

The Black Stars coach will also use two proven strikers in Caleb Ekuban and captain Jordan Ayew in his starting team, serving his intention of attacking the opponent even though they would be playing the match as visitors in Omdurman.

True to the prediction of the Ghana's leading football news outfit, the Black Stars coach has named a largely changed starting team to face the Nile Crocodiles in Group C.

Injuries to substantive captain Andre Ayew and winger Samuel Owusu has forced the coach to make some changes while augmenting the starting line-up with the arrival of the more experienced Wakaso and Schlupp.

In-form St. Legon Cities goalie Fatau Dauda has been given the nod to start between sticks ahead of Swiss-based Ati Zigi.

Surprisingly, central defender Nicholas Opoku will play from the right-back while Baba Rahman maintains his place at the left side of the defence.

John Boye and Alexander Djiku will also maintain their position at the centre of the defence while Wakaso will partner Afriyie Acquah in central midfield.

This makes the Black Stars defence and midfield perhaps the strongest in recent time with several in-form or experienced players starting in the match.

Tarique Fosu will also maintain his place on the right side of the midfield while Schlupp will play from his favourite position of the left side of midfield.

Ekuban will play as the lone striker while Jordan Ayew will take the role of the playmaker to provide the needed threat to draw out the opponents who have been strong in defending.

Ghana have a perfect record in the qualifiers for rhe 2021 Africa Cup of Nations and a victory for the Black Stars on Tuesday will take them through to the tournament in Cameroon.

The Black Stars defeated Sudan 2-0 in their previous fixture played in Cape Coast on Thursday with Andre Ayew scoring both goals in the game.