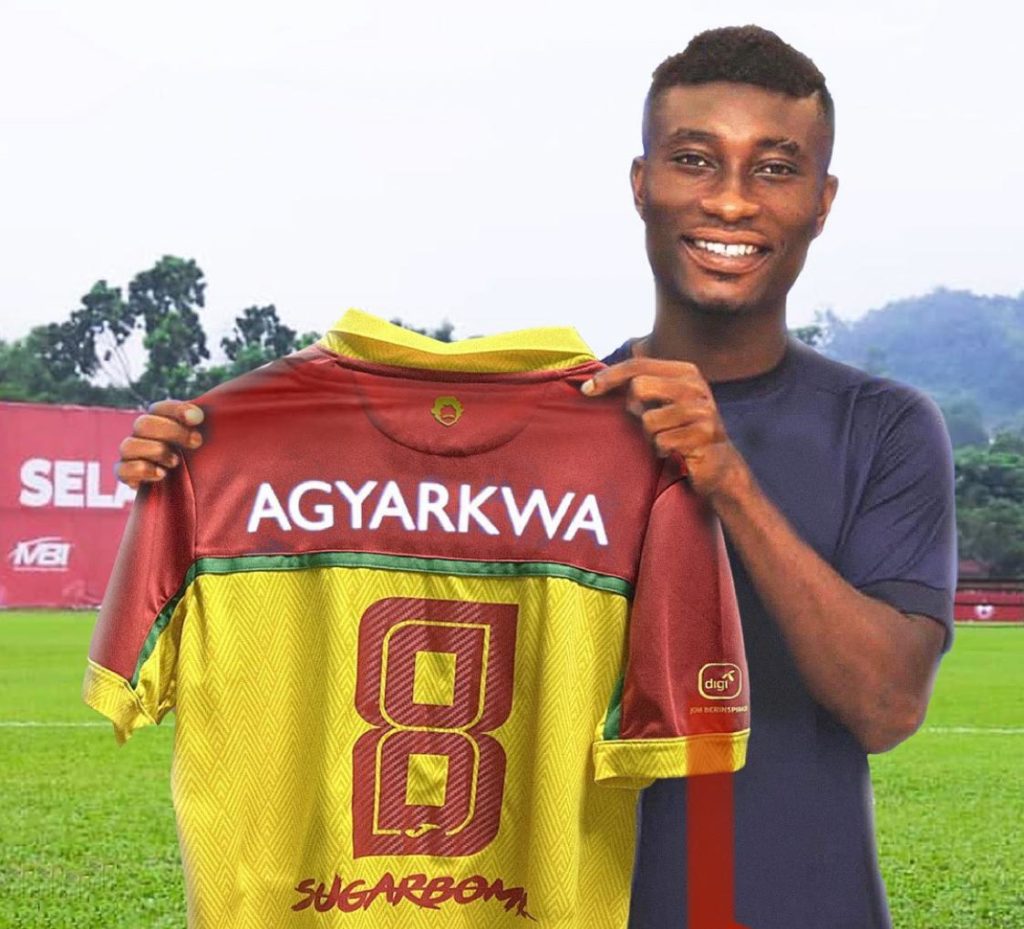 The 20-year-old arrived in Kuala Lumpur on Wednesday and was unveiled on Thursday following an exciting season in the Division One League in Ghana where he was spotted.

Agyarkwa was one of the best players in the onoging DOL after being named Man of the Match in eight out of 13 matches throughout the 2021 half season.

The financial details as well as the length of the contract of the move were not revealed.

But the move to Asian country has been smartly designed to pave the way for a move to Europe, similar to the path taken by his mentor Frank Acheampong who moved to Thailand before securing a move to Belgian giants Anderlecht.

Agyarkwa and the Black Stars playmaker Acheampong are under the same Lion Share Management and a similar career path is being crafted for the young player who excited the DOL this season.

Under the highly respected German coach Karsten Neitzel, a former colleague of Ibrahim Tanko at Freiburg and Japan, Agyarkwa will receive the attention of European clubs who frequent Selangor for talents to Europe.

"Accra Lions Football Club can officially confirm the departure of Alex Agyarkwa Ameyaw to Malaysian powerhouse Selangor FC. The midfield magician has been one of greatest players to ever grace our shirt in the short history of our club," the Ghanaian club said in a statement on Thursday.

"His outstanding performances earned him a record-breaking ten “Man Of The Match” awards in seventeen league matches this season.

"Alex leaves Accra Lions Football Club with our thanks for his efforts during his time as a lion and with our best wishes to him for the future."

The talented player was registered by the Malaysian side before the second transfer window closed on 31 May 2021 and it explains why he colud not play for Accra Lions in the recent matches.

He will join two other Ghanaian players at the Malaysian club who have Jordan Ayimbila and George Attram in their ranks after also joining from the ambitious Accra-based club.

According to Michael Feichtenbeiner, Sports Director of Selangor FC, the 172-centimeter player will fill the middle ranks of the Selangor squad with his potential.

“After seeing the best performances exhibited by Jordan Ayimbila and George Attram as well as the good relationship with the Accra Lions club, I am excited about the potential of Alex," the German national said.

“Alex has performed very well and was often the Man of the Match in the matches he was involved in. He is also a player who has the individual skills needed in a squad."

"In addition, he is also a flexible midfielder because he can play in the number 8, 10 and 6 positions well.

“He also has the advantage of a dominant left foot and is able to make the right passes to the striker, in addition to having good fidgeting skills. This will give advantages in the style of play that we use today.

“I put him in Selangor FC 2 to help him adapt to the DNA of Selangor FC like Jordan Ayimbila and George Attram. This step is necessary to prepare Alex for the bigger tasks and challenges at this club,” said Michael.