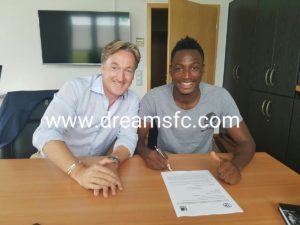 Baba Rahman sealing the contract with Schalke on Sunday afternoon

The 22-year-old signed the one-year loan deal after his successful medical on Sunday.

Rahman only moved to Chelsea a year ago—signing a five-year contract after joining Jose Mourinho’s champions from Augsburg.

He managed 23 appearances in all competitions but failed to impress new manager Antonio Conte on pre-season.

Rahman has rejoined his former Augsburg manager Markus Weinzierl who is now the coach of Schalke.