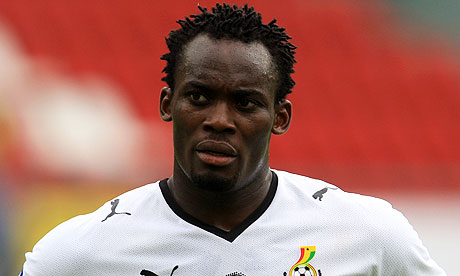 Michael Essien has returned for Ghana after a two-year absence

Chelsea midfielder Michael Essien has made a shock return for Ghana after a self-imposed two-year international exile from the Black Stars.

The 30-year-old has been named in the Ghana squad to face Zambia in a crucial 2014 World Cup qualifier in Kumasi next month.

His return is a huge surprise for the football world as the midfielder had not given any prior hints of returning to action for his country this soon.

Essien's availability for the Black Stars is a massive confidence boost for the Ghanaians ahead of the game against the Chipolopolo that will decide who will reach the final phase of the 2014 World Cup qualifiers.

Essien sought permission to stay out of Ghanaâ€™s 2012 and 2013 campaigns in the African Cup of Nations as he sought to regain his fitness and first team place at Chelsea.

The Chelsea ace had promised Ghanaians in June that he would make an announcement about his return to the Black Stars after his charity game in Accra.

But he could not confirm the date which sparked some concern among local football fans about his commitment to the Ghana cause.

However, he has lived to his promise of making himself available for the next competitive Black Stars match with this shocking and unexpected return to the fold.

The Chelsea midfielder has been away from international football since recovering from a career-threatening knee injury two years ago.

Essien asked to be excused from international duty in 2010 following a succession of injuries sustained while on national assignment.

The powerhouse wanted to concentrate his efforts on the Blues as he aimed to stay injury-free after spending more than six months on the sidelines with a knee injury.

Essien wanted to concentrate on club football to regain his assertiveness and fight for a position at Chelsea but was loaned out to Real Madrid because of the lack of playing time.

He last played for the Black Stars in June 2011 in an Africa Cup of Nations qualifier against Congo at the Baba Yara Stadium.

The Chelsea ace asked to be excused from international duties to concentrate on his club after returning from a six-month injury layoff in 2011.

Essienâ€™s wife Akosua Puni promised in June that the Chelsea midfielder would make a big announcement regarding his future with the Black Stars after the charity game.

However the announcement was not made which sparked concerns that he had broken the promise he made to the people of Ghana about his return to the Black Stars.

It has now emerged that he wanted to make the surprise bigger than expected with a sudden announcement of his return.

Ghana currently top Group D of the African World Cup qualifiers and will meet second placed Zambia in September in a game which decides which team qualifies for the final play-offs.