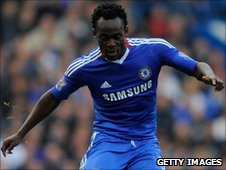 Michael Essien's agent has rubbished reports that the midfielder is on the verge of leaving Chelsea following the arrival of new coach Andre Villas-Boas, MTNFootball.com has exclusively revealed.

The Ghana midfielder has consistently been linked with a move away from the club this summer with AC Milan reported to be interested in the enforcer.

The speculation heightened following the arrival of the Portuguese manager last week with Bayern Munich said to be keen on signing the Ghanaian.

Villas-Boas was reported by the English newspapers to have drawn up a list of five players he wants to axe with the Ghanaian player included.

The Daily Mail newspaper reported on Monday that Bayern Munich have stepped up the interest in the 28-year old following coach's arrival.

But Essien's agent Fabien Pivateau says Villas-Boas has high regard for Essien and will feature in the clubs plans next season.

"It is not true that the club's new coach Villas-Boas want to release Michael.

"In fact the new coach knows Essien very well having worked at the club before and he knows what Michael can do for the club.

"Michael is also focused on staying at the club because he has a very good relationship with the team's supporters, the new manager and the club owner. He is not leaving."

Villas-Boas was part of Jose Mourinho technical staff when the then Chelsea coach signed Essien in 2005.

The former Lyon man has made 149 Premier League appearances for the west London club since joining in 2005 for Â£24m and is a firm favourite among fans.

Real Madrid, Juventus and AC Milan are the other clubs who have been reported to be interested in the Ghana midfielder.