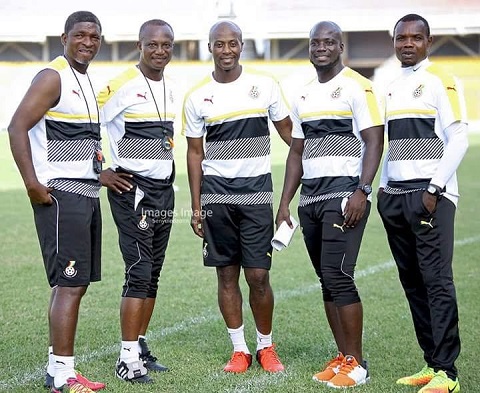 In a massive football earthquake, Ghana coach Kwesi Appiah has called for his highly-experienced assistant Tanko Ibrahim and legend Stephen Appiah to be sacked from their posts with the senior national team, Ghanasoccernet.com can exclusively reveal.

The Black Stars coach has written to the Ghana Football Association (GFA) in his post-Africa Cup of Nations tournament report saying he doesn't want to work with the duo after the Black Stars' disastrous showing at the tournament in Egypt in July.

The national team bombed out of the competition at the second round stage which was the country's worst outing in 13 years which resulted in widespread calls for coach Appiah to be sacked claiming he is incompetent.

However, Appiah has turned the knife of his two popular assistants in the latest ruthless and brutal culling of his backroom staff.

It is unknown why coach Appiah took the shock decision but insiders claims the Black Stars coach hold the two responsible for the team's disastrous showing in Egypt.

Others claim with Tanko being more experienced than the senior coach at the highest level of world football, Kwesi Appiah feels threatened by the presence of the duo.

Tanko looks like the most experienced among the technical staff having coached in the Bundesliga and the Japanese top-flight as well as being the assistant coach of the Cameroon national team.

With the Africa Cup of Nations qualifiers looming in November, Appiah has called for the massive changes of sacking the two popular Ghana legends before the qualifiers start saying the decision will help the Black Stars qualify.

Stephen Appiah, the legend of the Ghana national team who led the country to their first two World Cup appearances, is the technical coordinator of the Black Stars and Kwesi Appiah also wants him removed.

It is not known what has caused the decision of Appiah to remove the two popular personalities but it exposes the crack in the backroom staff during the tournament in Egypt.

These are the latest to be sacked after Appiah sacked Maxwell Konadu and Ishmael Hamidu as backroom staff members before the Africa Cup of Nations even though the duo played key roles for the team to qualify for the tournament in Egypt.

Tanko was appointed as one of the assistant coaches of the Cameroon national team in 2013 after experienced German manager Volker Finke appointed him.

The German coach mentored Tanko during his playing days at SC Freiburg and the duo worked together to return Cameroon to the top of African football.

The German trainer made a similar request to have Tanko serve as his assistant having worked him in several posts.

For Tanko, it was his first job since leaving German side FC Cologne in 2012.

He joined the likes of Cecil Jones Attuquayefio and Sellas Tetteh as Ghanaians to have had stints with their African national teams.

During his hey days, Tanko had stints with Borussia Dortmund before joining SC Freiburg in 2001, where he retired six years later.

He was also a member of the Black Stars that placed fourth at the 1996 Africa Cup of Nations in South Africa.