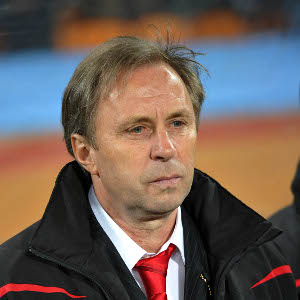 Ghana coach Milovan Rajevac has finally signed his new contract to lead the Black Stars to the 2014 World Cup in Brazil, Ghanasoccernet.com can exclusively reveal.

The Serbian manager sealed the deal over the weekend after he reached an agreement with the Ghana Football Association over the terms of his contract.

Rajevac, who led the West Africans to the quarter finals of the World Cup for the first time, signed a four-year contract.

"Coach Milovan Rajevac has signed the four-year deal and sent it to the GFA. Both sides are fully satisfied," a source within the Ghana FA told Ghanasoccernet.com.

His first task under this new deal is to play Swaziland on 5th September in the 2012 African Cup of Nations.

Rajevacâ€™s contract ended three weeks ago but the mutual trust between the Serbian and the Ghana authorities ensured that he stayed on despite offers from some clubs and countries.

This comes despite his native Serbia offering him by far more than what he negotiated with the Ghana FA. Saudi Arabian side Al Ahli also made a huge offer to Rajevac with a similar offer also coming from Al Sadd of Qatar in their bid to woe the Serbian away.

The Serbian rejected the offers insisting he wants to stay on as Ghana coach and now he has signed the deal.

The Black Stars must also qualify for the 2014 World Cup and at least reach the semi finals of the tournament in Brazil.