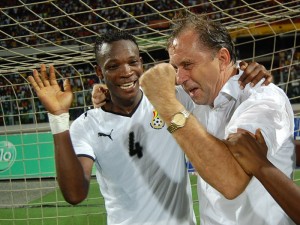 Ghana coach Milovan Rajevac gave a final warning to the Serbia Football Federation (RSS) on Friday that he is NOT interested in leading the European country after a last-minute desperate attempt to lure him.

The manager revealed on Friday that he will sign a four-year deal to coach the Black Stars but that didnâ€™t deter the RSS to attempt a last throw of the dice while the coach was on transit in Amsterdam from South Africa.

Rajevac told RSS bosses in telephone conversation that he is only interested in leading the Black Stars at least to the semi finals of the 2014 World Cup in Brazil, a source within the Serbian federation told Ghanasoccernet exclusively.

The RSS contacted the master tactician on Friday morning to offer him an improved bumper deal before they announce the sacking of current coach Ratomir Antic in the afternoon in Belgrade.

â€œOfficials of the RSS called Rajevac to offer him the Serbian job once again but to the disappointment of the officials he rejected them outright,â€ the source who pleaded anonymity told Ghanasoccernet.com.

â€œThey gave him a salary more than what Ghana has given him but he says he wants to lead Ghana the World Cup in Brazil to the semi final.

â€œThe deal is meant to make him change his mind about Ghana but he told them in no uncertain terms that he is a Ghana loyalist.â€

Rajevac has snubbed several offers to coach his home country within the past four weeks, insisting he was only keen on coaching Ghana after leading the West Africans to the quarter final of the World Cup for the first time.

The RSS offered the astute manager a bumper offer to coach his home country after last monthâ€™s World Cup in South Africa but the Serbian who has transformed the Black Stars was resolute.

The latest attempt lends credence to the news report in the Belgrade daily newspaper 'Belic' on Friday that the FSS has decided to sack Antic at a press conference later Â in the day.

Antic led Serbia to the 2010 World Cup, for which it qualified top of its group. At the tournament itself however, Serbia played miserably and ended last in its group, behind Germany, Ghana and Australia.

The coach aggravated his own situation by verbally abusing the referee following Serbia's World Cup defeat to Australia, which earned him a four-match ban from the world football organisation Fifa.

Players and fans backed Antic even in the latest blow, a one-nil loss to Greece in a friendly in Belgrade on Wednesday.

Serbia opens its qualifying campaign for the 2012 Euro at Faroe Islands on September 3.