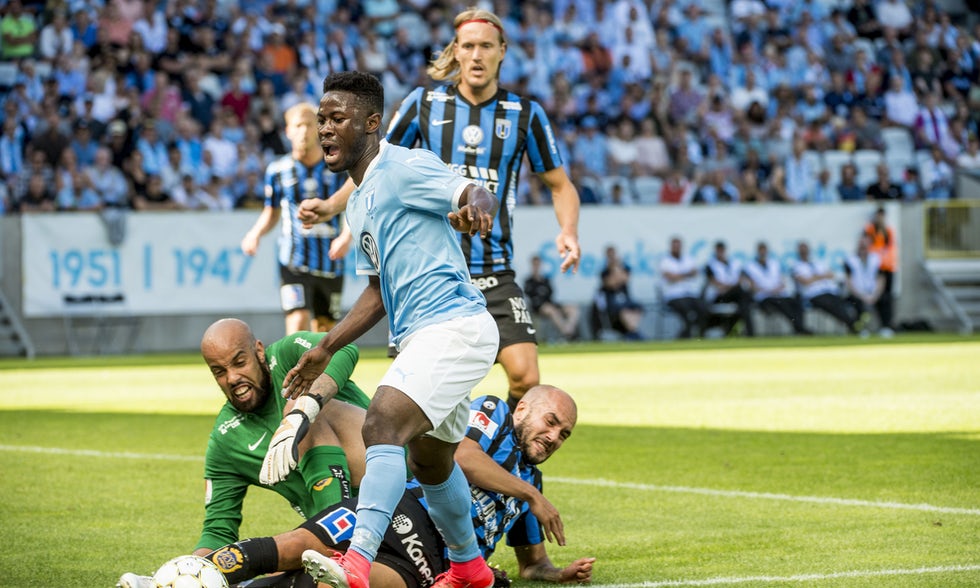 Kingsley Sarfo was a talented player for Swedish giants Malmo

Ghanaian giants Kumasi Asante Kotoko have quickly swooped to complete the signing for talented Ghanaian youngster Kingsley Sarfo after he was released from prison in Sweden.

The 24-year-old was siged by the Porcupine Warriors this week after he returned to the country after serving time in the European country on an allegation he vehemently denies.

The Kumasi-born signed Kotoko to boost their squad as they prepare to make a major impact in the CAF Champions League.

"We have signed Kingsley Sarfo for the new season. He is now part of our team" Lawyer Sarfo Duku told Nhyira FM's Bright Yeboah Taylor.

He follows in the footsteps of Kwame Bonsu who suffered a similar fate in Sweden but quickly revived his career with the Porcupines after his release to land a move to Tunisian giants Esperance after just one season.

Sarfo is the third most expensive signing in the history of Swedish giants Malmo FF after he sealed the move from rivals Sirius in January 2018 after passing his mandatory medical.

The talented winger was signed for $1.5m on a four-year contract but the prison sentence curtailed his career.

Sarfo made 60 appearances for IK Sirius in the Superettan and 11 in Allsvenskan, scoring nine goals and providing 18 assists in total.

The Swedish court sentenced Kingsley Sarfo to 32 months in prison in June 2018 after the Ghana international was found guilty of two cases of statutory rape of an under-aged girl.

The Malmo District Court says the 23-year old Sarfo, a midfielder with top Swedish club Malmo FF, had sexual intercourse with a 14-year-old girl in an apartment and in a public toilet.

The court also ordered Sarfo to pay 150,000 kronor ($17,260) in compensation to the girl, adding he should be deported after jail and banned from returning to Sweden for a 10-year period.

Safro has said his contract with Malmo FF, which he joined in 2016, would be terminated if found guilty.