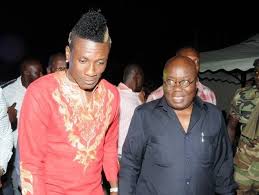 The president of the West African country made the order when he spoke to the the iconic striker on Tuesday evening just one day after his quit the national team in anger.

Gyan quit on Monday just weeks before the Africa Nations Cup sparking a huge national debate and disquiet in many quarters.

Gyan said his decision had been taken as a way to protest a plan by coach Kwesi Appiah to deny him the opportunity of captaining the Black Stars in next month's Africa Nations Cup in Egypt.

But Pesident Akufo Addo who is keen on helping the Black Stars win the title spoke to the Turkey-based player and urged hi m to reconsider his decision.

President Akufo-Addo, subsequently, also spoke on the telephone with Asamoah Gyan, and informed him of the considerable national disquiet over his decision to retire from the Black Stars,'' the spokesman for the Ghana President, Eugene Arhin wrote in a statement on Tuesday night.

"The President urged him, in the national interest, to rescind his decision to retire from the Black Stars, and make himself available for selection by Coach Kwasi Appiah."

Gyan  retired just ahead of the Africa Nations Cup which kicks off on June 21.

The Black Stars are in Group F with Cameroon, Benin and Guinea-Bissau.

Gyan made his international debut at the age of 17 against Somalia in 2003.

He is Ghana’s all-time goal scorer in the national team with 51 goals in his 106 appearances.