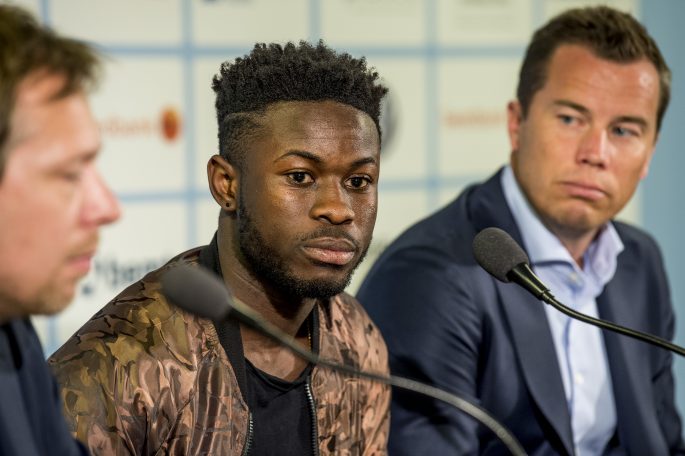 Kingsley Sarfo with officials of Malmo in Sweden

A female judge in Sweden ordered the release of Ghanaian footballer Kingsley Sarfo from police custody on Sunday after being held under the suspicion of raping a minor and attempted rape.

The 22-year-old, who plays for local giants Malmo, and was arrested yesterday, denies any crimes.

The Malmo playmaker could now make his way to join the Ghana national team after he was invited to the Black Stars for his debut national team appearance.

While admitting during the hearing that he had sex with the girl, Sarfo insists he did no wrong - insisting the girl has given him and the public the impression that she is 17 - two years above the age for consensual sex in Sweden.

State prosecutors were keen for the court to hold the talented midfielder until the final determination of the case.

Even though he is still a suspect in the case, the judge Christina Nilsson ordered Sarfo's release insisting he will not skew or influence the investigation.

"There is no risk that he will influence the investigation and there is no reason to arrest him," said councilor Christina Nilsson.

On Sunday, Sarfo was released at the end of the hearing because it was clear that he was not arrested, but the player is still a suspect.

The District Court did not find the grounds for caging the football player, partially denying the prosecutor's suspicions.

Sarfo is, however, still suspected of crimes. The decision was taken just before 13 o'clock today by Councilor Christian Nilsson.

The court rejected the prosecutor's claims of an attempted rape of a minor in a hotel in Malmö.

He is, however, still accused of sexual exploitation at the same hotel, as well as in the People's Park in Malmo.

"He admits he had sex with the plaintiff," said his defense lawyer Mikael Sundman.

"But there are question marks around when and where he had sex with the plaintiff," he says.

"He also did not have the knowledge that the plaintiff has been under 15 years."

The football player admitted through his lawyer the circumstances after the presentation by prosecutor Rikard Darell in the district court.

"But there are no subjective conditions for crime," said Mikael Sundman, a trained criminal prosecutor.

Yesterday, the Malmo went public and confirmed that one of the club's players had been arrested.